I've been on vacation for a few of the past Fridays and have missed my weekly trip to the Copley Farmer's Market. Here's a recap of some of the recent finds that I did have (and didn't have time to post).
First up, smoked bluefish spread from the guys at Nantucket Wild Gourmet & Smokehouse. This was delicious - better than those cream cheese-y spreads out there. It was great served on a warm toasted bagel. 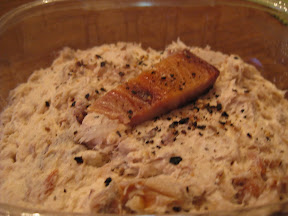 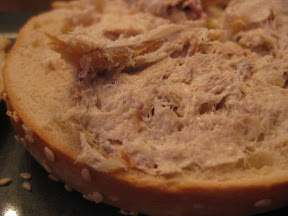 Next up, my regular lunch the Goat Cheese picnic. Sometimes I feel like a little something extra to go with the tasty cheese and fresh bread. It was raining at the market this day, so my favorite vendor for dessert wasn't there (they pack up at the first drop of rain). So I opted for a healthier addition. I picked up a green heirloom tomato and fresh cucumber to make little sandwiches. For dessert I got a cranberry orange roll from Iggy's. This is a very wallet friendly lunch:

A great way to support local farmers and get a delicious deal. 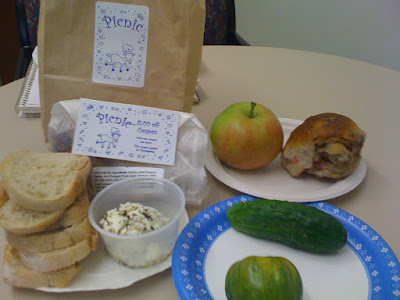 Here's a look at the inside of the tomato. 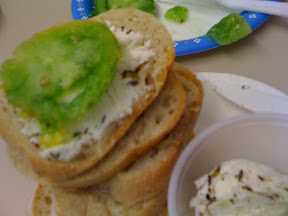 Fresh Fish Tacos (made at home) 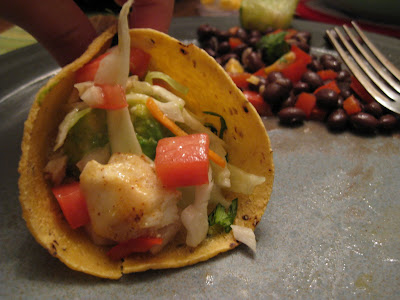 Inspired by the trend of tasty tacos at some of our favorite restaurants, I decided to try my hand at making them at home. We're having a beef-free week - after documenting our meals we realized that we were eating red meat a little too frequently. The hot item in the food world right now is fish tacos. The dish incorporates a few of our favorite ingredients: avocados, cilantro, lime, and fresh fish. I opted for a pan friend (not breaded and fried) version to keep it on the lighter side.

We are also trying to stick to a stricter budget for food, so the fish choice was based on the lowest price at the store that day - cod fillet. For the two of us (no leftovers) we got 1/2 pound of cod fillet (on the thick side). I decided to wing it and make up my own recipe instead of looking one up.

This was great with the cod - the hubby decided that the recipe would be tasty with salmon or mahi mahi (and fresh tuna if it ever went on sale). For the wrapper we used a small corn tortilla that had more flavor and was easier to manage than a giant burrito sized flour tortilla. Topping included a quick pickled cabbage, diced avocado, fresh tomato salsa, chopped cilantro, and a squeeze of lime juice.

This was a quick meal. While the fish was marinating I chopped veggies for the salsa and the black beans. The beans were started, salsa and avocado prepared, and then all that was left was cooking the fish and warming up the tortillas. I only wish that we had some margaritas to enjoy with the meal...there's always next time.

Here are some photos and recipes. I didn't write down measurements as I cooked, this is my guess at what I did!

Put half the olive oil into a bowl with the smashed garlic clove and jalapeno
Put the cut fish into the bowl
Sprinkle with chili powder, cumin, Tabasco, and salt and pepper
Put in the refrigerator for 10 minutes (or as long as you need to prep the other components)

Heat a non-stick skillet over medium heat (on a 1-10 dial, I used 5)
Remove fish from the marinade and put into the skillet
Cook for 4 minutes on the first side
Flip, and cook for 2 minutes on the other side
When the fish is cooked through, use a fork to break up the big pieces (it will flake along the grain)

Serve with warmed corn tortillas and the following toppings

Quick 'pickled' Slaw
I cheated and used a prepared coleslaw mix (cabbage and carrots). Use only enough for this meal. The idea is to get a nice tangy slaw to play off the salsa and avocado flavors. You could try any vinegar you have (in the next post on turkey tacos, I used red wine vinegar) 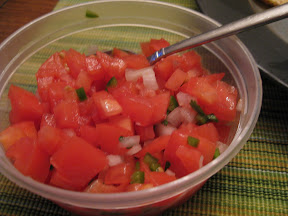 Heat a small amount of olive oil in a small pot over medium heat
Add in red pepper, garlic, jalapeno, and onion
Cook for about 5 minutes, until just softened (don't burn the garlic!)
Add in beans
Bring to a boil and then reduce to a simmer
Simmer until the rest of the meal is ready 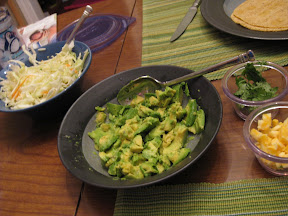 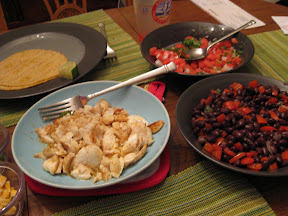 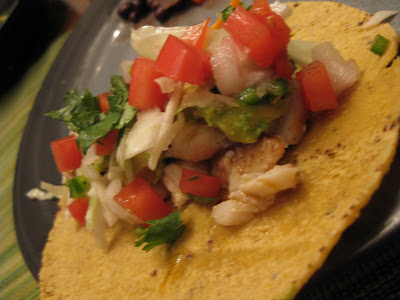 All these meals...Now for a Dessert

I've mentioned my love of free things and coupons before (it's no secret). This week I had a coupon for a new product - Nasoya soy creations. It might sound a little (or very) scary, but it is essentially pudding with soy milk instead of regular milk. I opted for the chocolate flavor and came home to check the website for recipes.

I decided on the Chocolate Bread Pudding, the recipe called for just a few ingredients. I adapted the recipe to a two serving size and used what we had on hand. For the full recipe, use the link above. My version used whole wheat potato bread. Instead of a whole baking dish (I would eat it all if it was there), I made 1/4 of the recipe and baked it in two 4-inch springform pans for eating and storing. 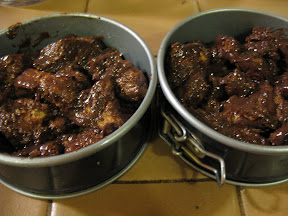 Preheat the oven to 350 degrees
Combine the soy creations, cocoa powder and bread in a bowl and mix gently (don't squish the bread)
Let the mix sit for 10 minutes so the chocolate can be absorbed
Divide the mixture evenly into two 4-inch springform pans (or oven safe bowls)
Bake for 15 minutes and check for doneness
Cook for up to 15 more minutes (it should be cooked through, but not crunchy)
Sprinkle with confectionery sugar
Serve warm (a la mode if you have ice cream on hand)

Sprinkled with a little powdered sugar it was delicious! The next day I warmed the second serving up in the microwave for about 15 seconds before eating. It was even better the second time! 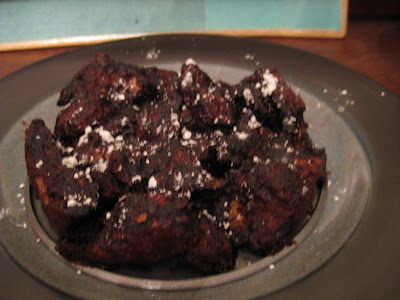