Back in 2010 I had the deliciously good fortune to discover Seta's Mediterranean Cuisine at the Copley Square Farmers Market. It happened to be her first day at the market and everything I tried was fantastic. Seta was so lovely and I had a great time talking with her (article here). Over the past three years I have enjoyed talking with Seta, tasting her carefully crafted dishes, and watching her business continue to boom.

Just a few years after starting her prepared food business Seta has realized her next goal - a space of her own open last month! Her cheery light-filled Seta's Cafe is located on bustling Belmont Street in Belmont, MA. 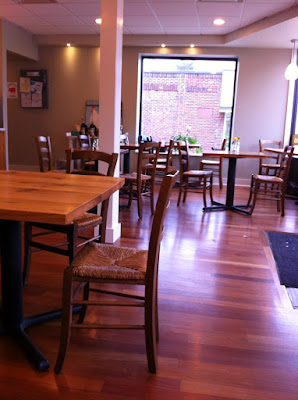 The Armenian-Mediterranean menu is framed on the wall and the counter opens to the kitchen, busy with activity. Smells of garlic and grilled meats filled the air during my early lunchtime visit and tempting treats filled the display case next to the register. 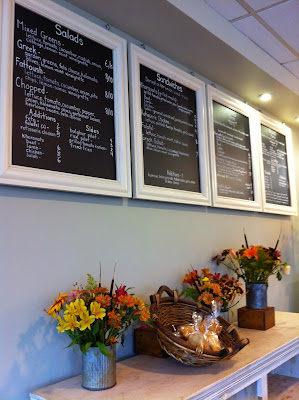 On a recommendation from the chef herself, I opted for the grilled lamb plate ($17). Every dish is made to order and after a short wait a sizzling plate arrived with my lunch. Enough for two people, the lamb plate included two generous skewers of tender lamb, bulghur pilaf, grilled tomato, grilled onion, and piaz (parsley, onion, sumac, aleppo pepper). 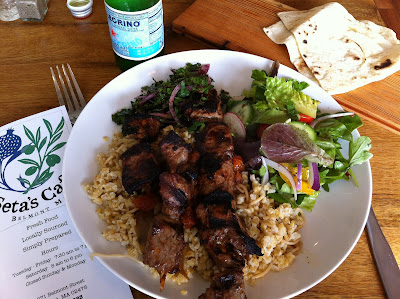 The portion was generous enough for two people. The lamb was perfectly cooked and the piaz was a perfectly complement. The combination of savory sumac with a little kick from the aleppo was the perfect complement. Even seemingly basic salad was dressed with a tangy vinaigrette that brought it to another level. The meal is served with housemade lavash to either roll the meat or sop up the vinaigrette from the plate. 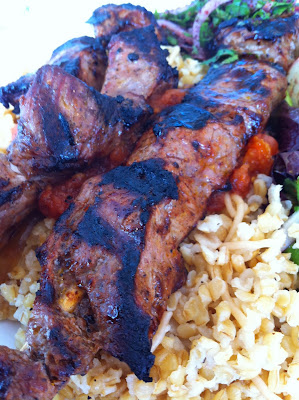 Here is a close up look at the piaz - finely chopped parsley, red onions, and delicious sumac and aleppo pepper combination. 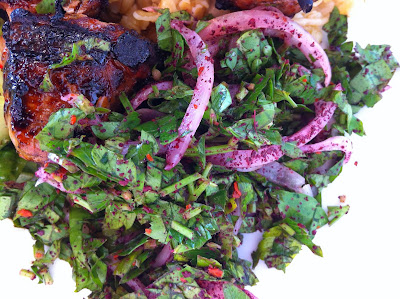 Ordering just one thing was just too hard. For dinner I took home half the lamb plate along with a chopped salad with added falafel along with baba ganoush.

My first trip to Seta's new place was a wonderful experience and I can't wait to get back in there to try out the rest of the menu - especially brunch. If you find yourself in the area, don't miss out on a visit to Seta's Cafe.

It is hard to believe that it’s time to start planning for Thanksgiving already, and this year is the added bonus of a joint Thanksgiving and Chanukah celebration. While I was poring over my stack of Thanksgiving themed food magazines, I came across a welcome distraction. In the November 2009 issue of Food & Wine there was an article entitled “Asia Comes to America.” Joanne Chang from Boston’s Flour Café and Bakery (and Myers and Chang) contributed a handful of recipes for traditional Chinese items made from non-traditional ingredients. The one that caught my eye was for scallion pancakes using store-bought pizza dough. Since I have been eating scallion pancakes almost every Thursday for the past few months (maybe year...), I thought I would give the recipe a try. (Recipe here, I quartered the recipe to make 1) 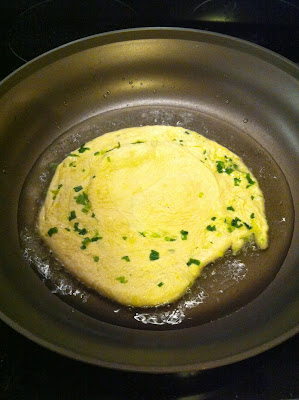 Does scallion pancakes every Thursday seem a little odd? Not when the delicious Mei Mei Street Kitchen truck parks across from your office every Thursday. When dumplings aren't on the menu, my next choice is whatever they are serving on a hot griddled scallion pancake. Some week’s it is braised beef, cheese, and pickles others it is roast beef, potato salad, cranberry hoisin and Swiss chard, or sometimes the double awesome. I know I can’t recreate the full Mei Mei experience at home, but the scallion pancake seemed like a good thing to try. 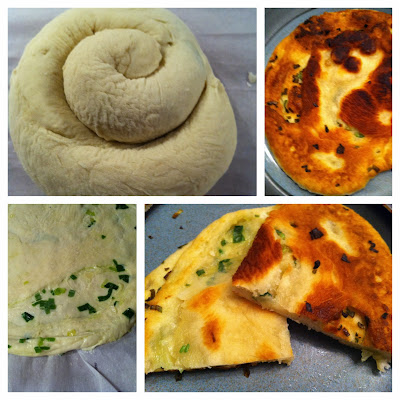 With a 22 oz. ball of pizza dough from the store, I didn’t need to use all of it for the scallion pancake. Earlier in the day I turned 3 pounds of local apples into an apple butter flavored with maple and pumpkin pie spice. This apple butter was packed with as much New England fall as I could find! Apples from Shelburne Farm (Stow, MA), pumpkin pie spice and apple cider from Bolton Spring Farm (Bolton, MA), and granulated maple sugar from The Warren Farm and Sugarhouse (North Brookfield, MA). I thought about making a batch of warm biscuits to slather it on, but then I remembered the leftover pizza dough in the refrigerator. Perfect for a no-fuss dessert! 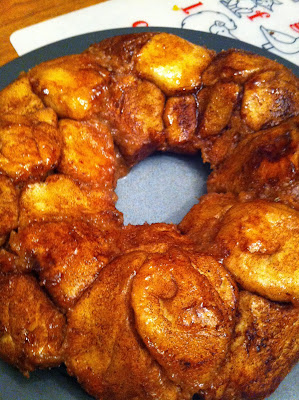 I tore up the remaining dough and tossed the dough balls in a generous amount of cinnamon sugar. After arranging them in a Bundt pan they got smothered in a mix of my fresh apple butter and melted butter. Thirty minutes and a flip later, maple-pumpkin pie spiced-apple butter monkey bread! There is no recipe for this one, tear up your favorite pizza dough (or even refrigerated canned biscuits), toss in cinnamon sugar, top with melted butter and apple butter, and bake at 350 for 30 minutes. Cool for a few minutes, invert onto a plate, and watch it disappear in no time at all. 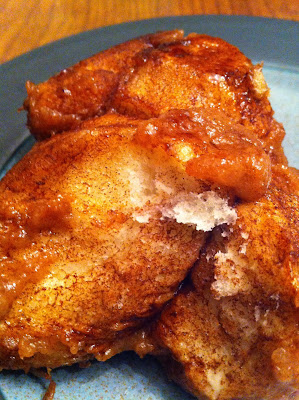 One ball of dough plus a few great sources of inspiration equals a delicious day in the Good Cook Doris kitchen. Hope your fall is just as tasty!

Add all ingredients in a Dutch oven or large, heavy bottomed pot
Cover and cook over medium-low heat 1 – 1 ½ hours or until apples are very tender, stirring occasionally
Place a large fine-mesh sieve over a bowl; spoon one-third of apple mixture into sieve. Using a spatula, press the apple mixture through sieve. Discard pulp. Repeat with remaining apple mixture.  (This took a little while to do, you want to get as much apple goodness as possible in the finished product)
Return  the apple butter mixture to the pot and cook over medium low for approximately 15 minutes, or until desired thickness.

Notes:
This recipe is not sweet – if you like your apple butter sweeter you can add up to double the amount of sugar and honey. I prefer a less sweet apple butter, to let the apples’ natural sugars determine the final sweetness.

I used a variety of apples from our recent apple picking outing: Cortland, Red Delicious, Empire, Golden Delicious, Rome, and a few others I can't remember.

This is the second post in a series about my first experience with competition barbecue. Last summer I helped my brother at a barbecue competition in Indianapolis, Indiana. This second installment in the series is quite delayed, but seems appropriate as I head out for barbecue season 2!

I am getting ready to head to Indianapolis for Smoke Siege BBQ Team's second season on the competition barbecue circuit. My brother's team has already completed one competition this season. This event will be number two of the season. We will be participating in the Wine, Brew, & Bar-B-Que, Too event hosted by the New Palestine, Indiana Lions Club. To get in the barbecue mindset, and ready for a crazy weekend, I am continuing the story of our competition day activities from last year's event. You can read about the event and our initial preparation at http://www.goodcookdoris.com/2012/11/smoke-siege-bbq-team-inaugural.html.


For this post I will focus on Friday at the competition - the preparation day. Turn-in and judging happens on Saturday. Friday is spent getting organized, prepping all the meats, and of course a little beer and schmoozing with the other competitors. Depending on Saturday's turn-in times, actual meat smoking doesn't start until somewhere between midnight and 2:00 am.

Once we got our work area set-up and ready, the prep work began. Rules stipulate that you can only trim meat before arrival. Kansas City Barbecue Society (KCBS) judges have to inspect your meat and give you the all-clear to get to work. With four meats and sauce to prepare, we started around 2:00 pm. My first task was to season and prepare the chicken thighs. For smoking chicken, dark meat is going to stay more moist and hold up to a few hours in the smoke. The chicken gets a nice rub down both under and over the skin before being put in the cooler to absorb the secret spice mixture. 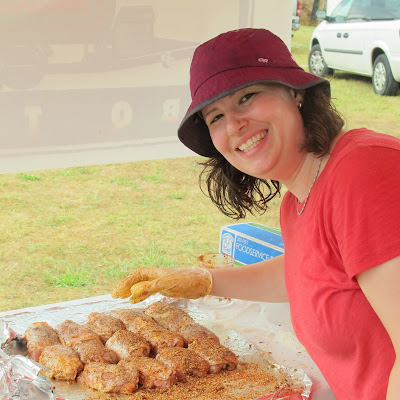 About halfway through the chicken prep a huge thunderstorm rolled through. We covered the meat,threw a wool blanket over our wood pile, held tight the tent, and rode it out. Thankfully we were just a little soggy and didn't lose any of our supplies.


Note: Even though you only turn in 6 portions of each meat, you cook a lot of extra. This allows you to select the best looking and tasting pieces for the judges. And it feeds all of the friends who come out to help you during the competition.

While I was busy massaging chicken, my brother Marc was tackling the larger cuts of brisket and pork shoulder. The meats need time to absorb flavors and you want them to stay moist throughout the cooking process. To achieve this cooks use a variety of techniques. Marc injects the meat with liquid and seasoning and then gives it a generous spice rub. I think we cooked 2-3 briskets and 2 pork shoulders.Ribs aren't treated to the injection process but do get a good helping of spice rub. Between 2:00 pm and 4:30 pm we were able to prepare all of the meats and clean up our work space. 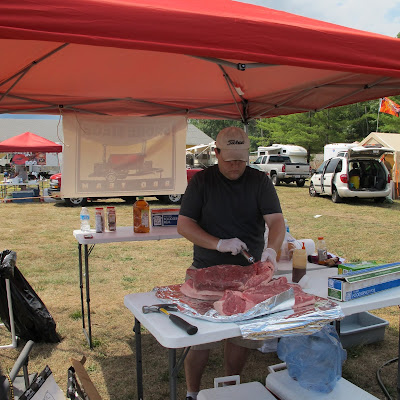 One of the perks of this particular competition was a complimentary dinner following the mandatory cook's meeting. All 50 pro teams listened to the rules and regulations before being treated to what I would describe as a very rich dinner. I am fairly certain that everything was cooked in butter. And if it wasn't , there was a giant vat of butter in which you could dunk your corn (or burger buns...). 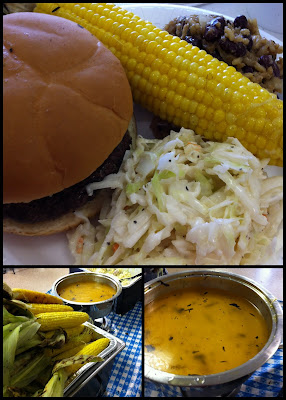 After swapping stories with fellow competitors and clogging our arteries, the rest of the evening was open. The opening ceremonies of the Olympics were on TV, competitors were checking each other out, and the beer was flowing. As the 11:00 pm hour approached, I bunked in to our overnight facilities and rested up for the long night ahead. 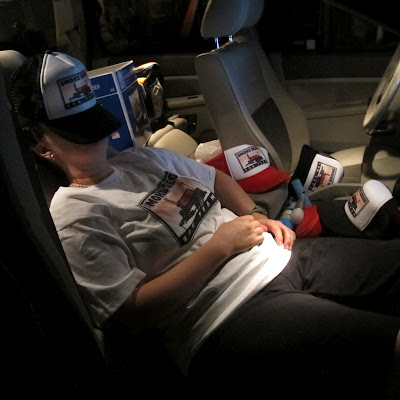 Many other experienced teams had queen size air mattresses with full sheets, others had cots, some had fully loaded RVs. For our inaugural season, we had reclining seats in the car. Around midnight the wood went into the smoker and started a slow burn to reach 250 degrees. Meats got a final prep and around 2:00 am the cooking began. 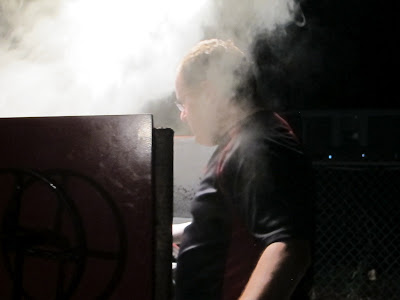 We made it through the night and as the sun rose over the smoker we were a little weary, but energized to face the competition head on!


Next up in the series are final cooking, presentation preparation, and a lot of good eats. I'll close by showing our schedule for the competition. To have a successful cook,  you have to start with the turn in time and work backwards. The meat needs time to rest before slicing, and everything has a different cooking time. As you can see below, Marc had a grid for the meat to go on, get wrapped in foil (prevent too much smoke flavor), if it need to be sauced, and when to take off the grill. 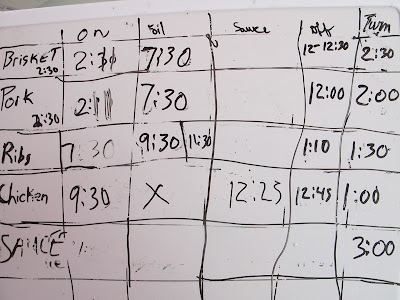 I'll wrap up this series, and then have a recap of our second year. I hope it is as fun as the first! I'll be tweeting & putting pictures on Instagram over the weekend. Follow along!
Labels: barbecue, grilling, smoker 1 comments
Email ThisBlogThis!Share to TwitterShare to FacebookShare to Pinterest
Posted by Lara @ GoodCookDoris at 9:35 PM