The hubby and I had just tried a new (and very delicious) locally owned Mexican restaurant over the weekend. I’m excited to have a source for great margaritas in the suburbs. Check out Viva Mexican Grill in Wayland if you are in the neighborhood. I enjoyed a delectable flank steak accompanied by a chicken enchilada with green chili sauce. The hubby had enchiladas with a trio of three different moles. When I came home to check out the May challenge, I was delighted that it gave me a chance to try making the enchiladas at home!
Our hosts this month, Barbara of Barbara Bakes and Bunnee of Anna+Foodhave chosen a delicious Stacked Green Chile & Grilled Chicken Enchilada recipe in celebration of Cinco de Mayo! The recipe, featuring a homemade enchilada sauce was found on www.finecooking.com and written by Robb Walsh.

I have been enjoying learning more about Mexican cuisine and cooking at home. I used the recipes provided in the challenge and made a tasty mess out of my kitchen! 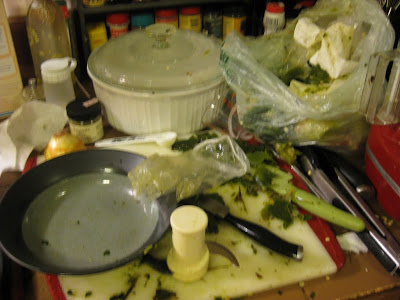 When I went to buy the ingredients, my store only had four Anaheim chiles in stock (who knew they were so popular!). I evaluated the other options and decided to use poblano peppers for the other half of the chiles called for in the sauce. I picked up the rest of the ingredients that I didn’t have at home – tomatillos, onions, and 6-inch corn tortillas. Luckily I had frozen some of the homemade chicken stock from the risotto challenge, and I was able to use it for the sauce!

Once I got home and got organized, I fired up the burners under my cast iron grill pan to start roasting and grilling. I underestimated the time I needed to char those chiles and peppers on the grill pan. It probably would have been more efficient to pop them under the broiler, but I had committed myself to using the grill pan. After scraping, scraping, saying a few choice words, and scraping some more, I finally got the skins off the chiles and peppers. While I scraped, I also cooked/roasted the tomatillos on the grill pan. 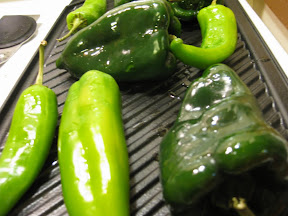 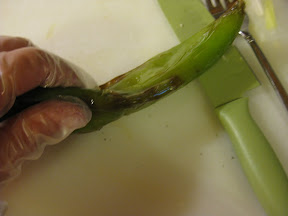 Once those were pureed in the food processor and the chiles were chopped, everything went into the pot for the sauce. Instead of the oregano called for in the recipe, I substituted the epazote I recently purchased (see the KC Culinary post). It has a more lemony scent than regular oregano. At this point, the hubby was getting a little antsy so I put him to work grating some Monterey jack cheese for the dish. I grilled the chicken on the grill pan and prepared the tortillas for assembly. 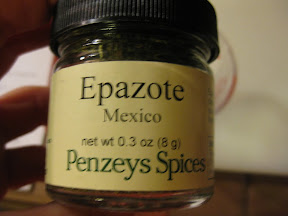 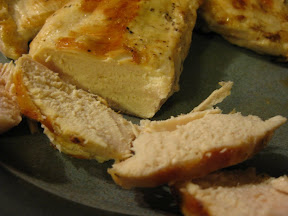 After what seemed like hours (and much longer than expected), it was time to assemble. I used my 9x13 glass baking dish so I could see the layers. Into the oven it went and dinner was finally served. We love cilantro at our house, so we generously garnished before serving. 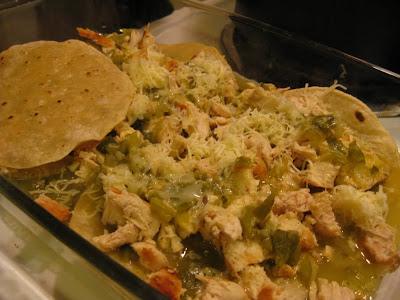 This was just as good (and more gratifying) than the enchilada I had at the restaurant. Next time I’d like to make it a little spicier, use all Anaheims chiles, and maybe use a traditional Mexican cheese. 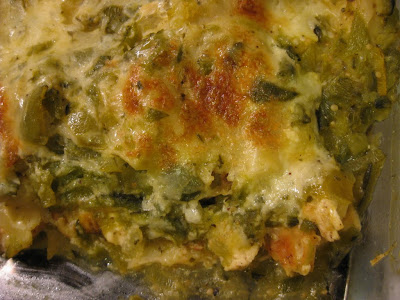 For the enchilada recipe:
http://www.finecooking.com/recipes/stacked-chicken-green-chile-enchiladas.aspx?nterms=50242,52390 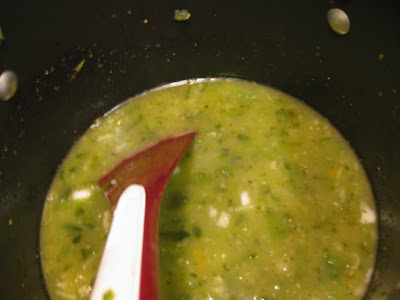 Labels: daring cooks, good for company, good for leftovers, mexican, restaurant meals at home
Email ThisBlogThis!Share to TwitterShare to FacebookShare to Pinterest
Posted by Lara @ GoodCookDoris at 10:10 AM