It’s almost June, wow time has flown by since the new year! I’ve been 30 for almost three months now and have been so busy that I haven't had a chance to write up my wonderful birthday party with friends and family.
My 29th year, the “power year” as my friend Megan calls it, was packed. I started blogging, started my masters program, became an aunt for the fourth time, started writing for Local in Season, witnessed some wonderful weddings, spent time with family and friends, and more!

To kick off my 30th year, the hubby (who would like me to say he's still 29 for another week) was in charge of planning the birthday festivities. Not just picking the date and place, but the menu, drinks, food, the whole works. In a nod to our vacation we planned to Spain, he decided on a Spanish themed birthday fiesta to get us in the mood for the trip.

The hubby called up our family culinary resource, my brother, for some menu consultation. My brother spent a summer abroad in Spain and has been cooking Spanish cuisine since he returned. He also put a call into our personal sommelier about some wine pairings. Well, little did I know that besides the surprise of the party details, my mom and brother came to town for the party!

We started the party day with a trip to the Wayland winter market to interview Vic Tirrito, the Pasta Man. My brother picked up a few last minute ingredients and we headed back home. While we were at the market, the hubby and my mom picked up the Party Favors cupcakes we ordered for the party. The three of them spent the rest of the day preparing a Spanish Feast. Nobody left the party hungry! 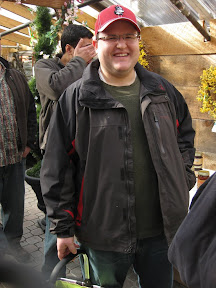 (my brother)
The menu for the evening, in photos. 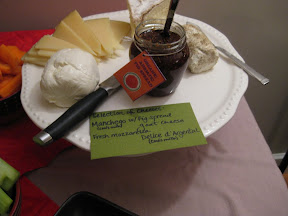 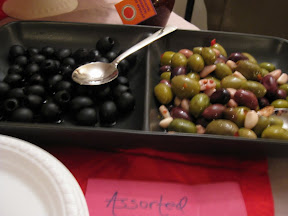 While potatoes are cooking, make the sauce:
Using a mortar and pestle, crush garlic with a little salt
Work in oil a few drops at time
As the sauce thickens, the oil can be added more quickly
Season with salt and pepper 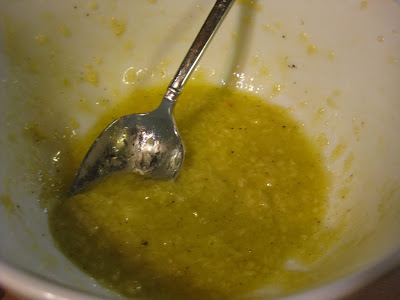 Drain potatoes well
As soon as they are cool enough to handle, cut into bite size pieces and toss with salt and the sauce
Serve warm 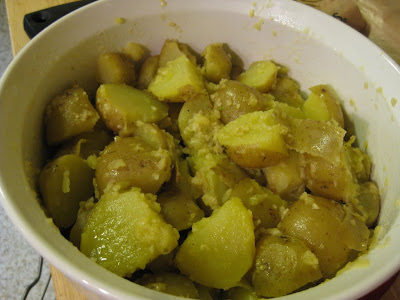 Heat oil in a large, heavy nonstick skillet over low heat
Add potatoes and onion to the skillet
Cover and cook over low heat for 15-20 minutes, stirring occasionally, until soft but not brown
Drain off and reserve oil
In a bowl, lightly beat eggs
Mix in potatoes and onions
Season with salt and black pepper
Let stand for 10 minutes

Wipe out skillet with a paper towel, then add enough of the reserved oil to cover the bottom of the skillet in a thin film
Add egg mixture, spreading it evenly
Cook over medium, shaking occasionally until the bottom is starting to turn brown and is set
Cover the skillet with a large plate and flip upside down to get tortilla out
Slide tortilla back into the skillet, cooked side up
Cook until lightly browned on the bottom
Slide onto a serving plate, cut into wedges and serve

This serves four as a main dish, 8 as an appetizer. We had 2 of these for our party. 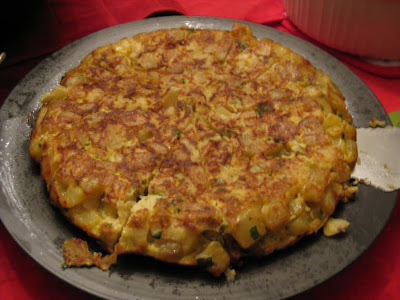 In a large, heavy pan, heat oil, add chicken and fry until lightly browned (about 10 minutes)
Using a slotted spoon, remove chicken and reserve
Add onions and garlic to pan and fry for 1 minute
Add peppers and eggplants and cook, stirring occasionally for 5 minutes
Stir in tomatoes, wine, stock, herbs, salt and pepper
Bring mixture to a boil, then reduce heat so liquid barely simmers

Return chicken to the post, spooning sauce over it
Cover pan and simmer about 45 minutes until chicken juices run clear when chicken is pierced with a sharp knife, and sauce is slightly thickened
Discard herbs
Taste, adjust seasoning as need
Garnish with parsley and serve 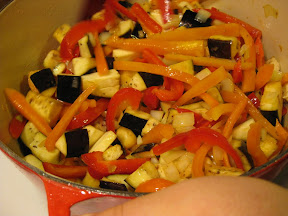 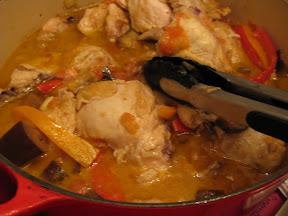 Simmer chickpeas in a large pot of water for 1.5 to 2 hours, until just tender
While they are simmering, make the rice
In a saucepan, heat 2 tablespoons of oil
Add garlic and fry for 2 minutes
Stir in rice and stir-fry for 3-4 minutes
Stir in 1.25 cups of stock, simmer for 10 minutes, then add another 1.25 cups of stock
Continue cooking 10-12 minutes, or until liquid is absorbed and rice is tender
Cover and keep warm

Drain chickpeas
In a skillet, heat about ½ inch layer of oil
Add chickpeas and fry, stirring frequently until golden-brown
Stir into rice, then transfer to a warmed serving dish
Pour tomato sauce over chickpeas and rice 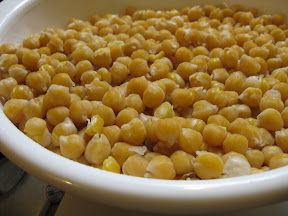 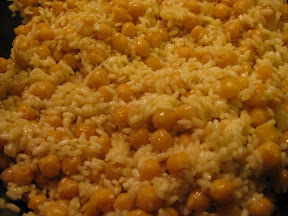 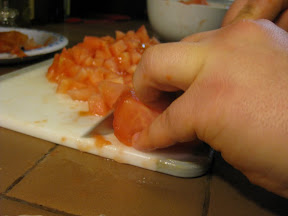 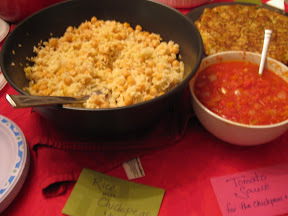 Drinks
Our friend Angel provided the Spanish wines for the evening (I snuck in one Oregon wine). We had all reds – all delicious. Here's a look: 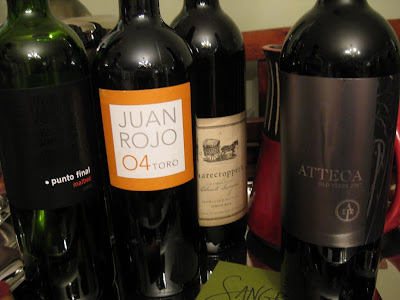 My contribution to cooking was a fruity sangria, adapted from a recipe from Chris over at the Half Hour Music Hour. I skipped the suggested brandy (none on hand), but followed the rest of the recipe. I made my own simple syrup (I can’t find the actual method I used) and it was delicious! 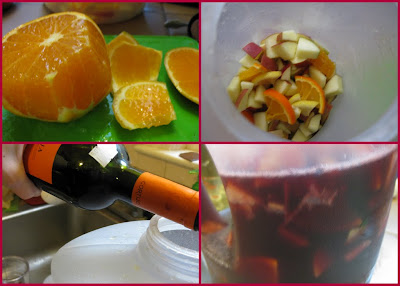 Combine all ingredients in a large pitcher and refrigerate, covered, 2 hours or up to 2 days. Serve over ice. 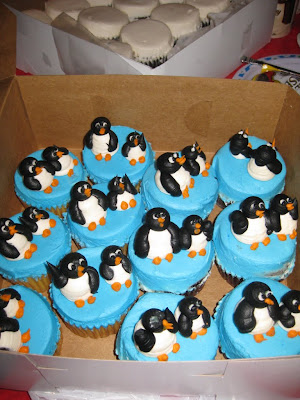 When the hubby asked what I wanted for dessert there was no question - cupcakes! He picked out some adorable cupcake themed invites and we decided to have a cupcake decorating contest. I can remember a great birthday party I had when we I was little where we all got aprons and chef hats and decorated cakes. We love Party Favors cupcakes - but they won't sell them without any icing. So we ordered some with flat topped white icing and bought an arsenal of decorating supplies and icing.

After enjoying the homemade sangria and a few bottles of wine, cupcake decorating fun ensued! They were all so great that we declared an all-around tie. Designs ranged from the Israeli flag to the Olympic torch, to uhh....I'm not sure what a few of them were supposed to be. Here's a look at the contenders. 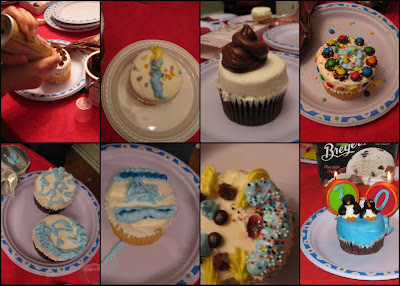 We had a wonderful time; it was so nice to celebrate with friends and family! This year I look forward to many fun adventures with new and old friends and a great time with family!
Labels: good for company, milestones
Email ThisBlogThis!Share to TwitterShare to FacebookShare to Pinterest
Posted by Lara @ GoodCookDoris at 1:58 PM