When He Fends for Himself: Bison Burgers

I never thought I would ever say this, but Ted Turner has had a positive influence in my life. Ever since I went to Ted's Montana Grill ten years ago and had my first bison burger, I knew I had stumbled upon something I really liked. There is a Ted's nearby to us and we have gone a couple of times, but I make an effort to see what other bison burgers are being created out there. More often than not, if a bison burger is on the menu I'll order it. Such is my desire to get a good burger that I had a bison burger on the way to Yellowstone, where one of attractions I was most excited about was to see the Buffalo roam. The burger was delicious and I don't feel the least bit guilty about. The herds of buffalo in the park were pretty awesome also. But, what does this have to with lonely dinners? 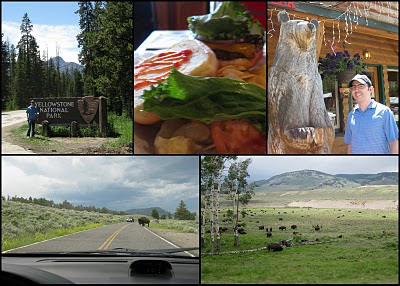 I don't know if you have noticed, but Whole Foods regularly stocks ground bison. When planning our meals for a particular week, the wife informed me that I was going to be on my own for a night. She told me this right in front of the meat counter, and because I don't really like to put too much thought into what I'm going to have for dinner 2 days in advance, and because the ground meat looked so good, I decided on the spot that I'd do bison burgers for when I fended for myself.

I had a solid plan for quickly forming the burgers and getting them on the grill when I got home, but I decided to take a load off first. This lead to "resting" for an hour or two, and before I knew it the wife was on her way home, it was kind of late, and I missed my opportunity to make the burgers. Admittedly the cooking and execution of my lonely meals is probably biggest hurdle I need to overcome. I can be quite lazy.

However, not all was lost. I originally purchased a half of pound of the meat so the next night I made two burgers for me and the wife to have for dinner. I wasn't fending for myself, but I was giving the wife a night off. Here's how the magic happened:

1. I placed the ground meat into a mixing bowl
2. Added dashes of salt and pepper
3. Sprinkled in some Worcestershire sauce (I've seen this go in burgers before, so it's staple, right?)
4. Added and egg and some breadcrumbs (The wife's suggestion)

I mixed this all up by hand and then formed the 2 patties. In the meantime, the grill was preheating so I took the burgers out back and threw them on. When they looked done, I used our fancy spatula to scoop them up and plated them. I also grilled up some corn on the cob go to with it. It turned out to be a really quick dinner and looking back on it, I'm not sure why I couldn't do it the night before. A couple of weeks back I promised more healthy and complete dinners and I think this one is a step in the right direction. Hopefully it is something I can build on so you all can be impressed by the next "When He Fends for Himself" 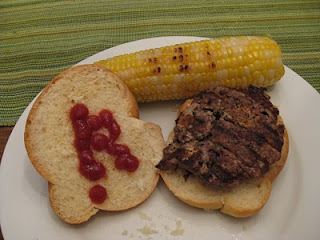 Labels: grilling, when he fends for himself
Email ThisBlogThis!Share to TwitterShare to FacebookShare to Pinterest
Posted by Lara @ GoodCookDoris at 7:27 PM