This past weekend we took a quick weekend trip to visit the hubby’s parents in Columbus, Ohio. They are frequent visitors to Boston so we haven’t been to Columbus in about 3 years. Like I do before any trip (or weekend for that matter), I did a little research on the must-not-miss food spots in our destination. In my research I learned that there are 40 taco trucks in Columbus (40!) and they have a dedicated website. There is also a website dedicated to Street Eats in Columbus. I also put out a tweet asking for suggestions. One of my sorority sisters referred me to a friend, who sent over a few great suggestions including the delicious Jeni’s Ice Cream. I tweeted back the Jeni’s was already on our list and about an hour later Jeni’s tweeted with flavor recommendations. The power of social media!

We arrived Saturday and headed straight to North Market. The market was established in the late 1800’s as the second of four public markets in Columbus. After moving to various locations around the neighborhood the market landed in its current location, an old farm equipment warehouse. Open in this location since 1995 the market is a lively home to farmers, small businesses, bakers, fishmongers, restaurateurs, and more. According to the website, more than a million visitors go through each year! 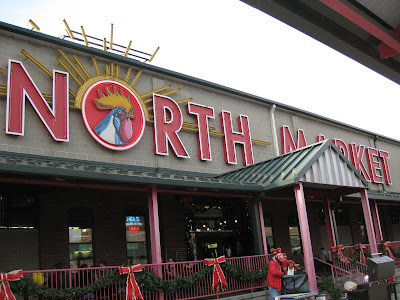 In my online scouting I checked out the merchants at the market. I knew we would be visiting Jeni’s Ice Cream’s original spot and wanted to see who else was in the market. 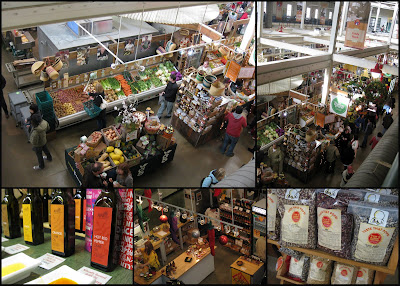 Kitchen Little Poultry and Game. The result of this partnership? Chicken and waffles of course! I’ve been on a chicken and waffles kick lately, mainly a result of the Fillbelly’s Chicken and Waffle truck being parked outside of work. The liege waffle was sugary and delicious. The buttermilk marinated chicken cutlet came direct from the cast iron skillet onto my waffle. It was topped with a generous pour of maple syrup and a good dose of hot sauce (on the side so I could share). Just look at how beautiful it was: 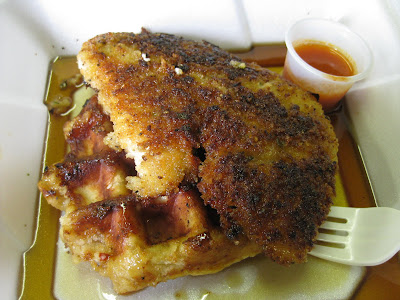 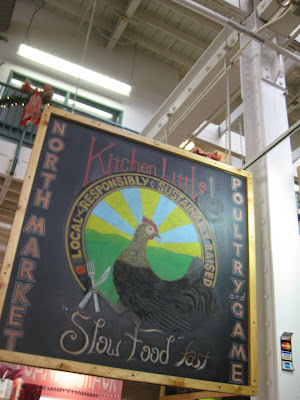 We spent some time walking around the market after lunch. My mother in law picked up a delicious assortment of flavored olive oils and a beautiful dish in which to serve them. I stopped to pick up some black popcorn from Pam’s Market Popcorn. They had quite an assortment of kernels: purple, rainbow, red, yellow, and black. Just next to the popcorn stand was a brand new shop, North Market Spices. This sun-filled space was stocked floor to ceiling with fragrant spices and dried herbs. The woman at the stand asked me about my purse (she said her daughter in law would love it), and I asked her if she was the owner of the stand. It turns out that her son was the owner. She had always encouraged her sons to cook and they loved being in the kitchen. He had stepped out of the shop for minute, but when he came back his mom pointed out my purse and told him I was asking her about his experience. He enthusiastically told me that he opened in August and has been busy ever since. They source their spices from all over the world, but try to have some local ingredients. They were looking forward to adding local herbs during the spring.  I picked up a bag of culinary lavender from nearby Urbana, OH along with some green chili powder and a za’atar spice blend to add to my spice cabinet.

Our last stop before leaving the market was, of course, Jeni’s Ice Cream! Since we were last there, Jeni’s was named one of the best ice creams in America! Thanks to their twitter recommendation we knew we wanted to try the seasonal flavors. After mini-spoonfuls of goat cheese & fig, olive oil & sea salted pepitas, and cherry lambic we made our choice. The hubby and his dad went with sweet cream with Appalachian elderberries. I chose the sweet potato with torched handmade marshmallow in a waffle cone. If we had more time in our visit, I would have gone back to try them all! 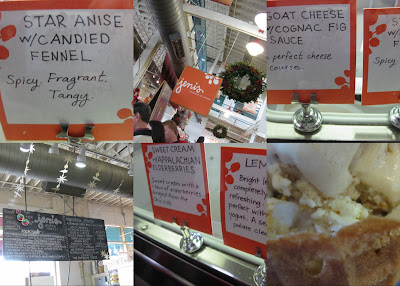 One of the other recommendations sent my way was for the Northstar Cafe. It turns out that my in-laws love this place and we headed there for Sunday brunch. The menu was small, but offered a good variety of options.  You order at the counter and then your food is delivered to your table steaming hot from the kitchen.  They did something I wish all restaurants would do - they kept the coffee mugs on a warming plate. That meant the coffee stayed hot all the way to the last sip.  Our breakfast choices included sweet potato turkey hash with fried eggs, hearth baked wild mushroom frittata with gruyere, rosemary potatoes and a fluffy biscuit, and cloud 9 pancakes (with ricotta). It was relaxed, tasty, and filled us up until dinner. 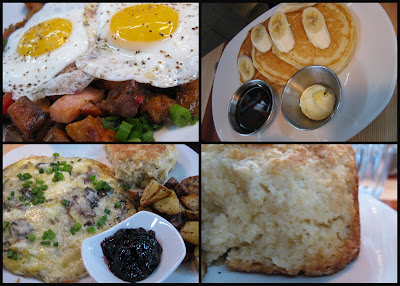 Stay tuned for our Sunday night dinner! My mother-in-law is an expert at using Trader Joe's ingredients to make quick and flavorful meals.  She was disappointed that there are already a number of Trader Joe's cookbooks out there (she wanted to write her own!), but she's changed her proposed cookbook title to: Quick and Easy Entertaining Ideas with Trader Joe's.  You don't want to miss her first recipe - coming up this weekend!