A Holiday Meal Stuffed with Flavor and Fun - Turducken!

Every so often an opportunity to try something new comes your way and you just have to say yes. That is how we ended up sitting around the table with friends, explaining to a two year old that a Turducken would probably say, “gobble-quack-a-doodle-doo!” 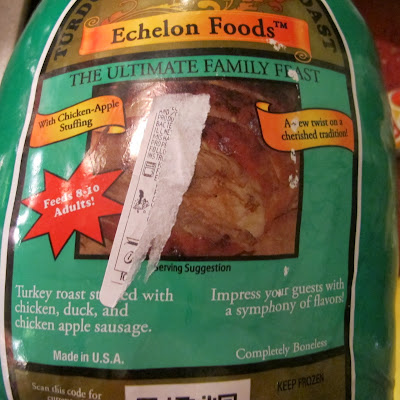 We laughed, ate, and pondered what this hybrid creature would really be like thanks to Echelon Foods, makers of the boneless Turducken Premium Roast we were eating. Our festive post-Thanksgiving meal was rounded out with my grandmother’s famous dressing, steamed green beans, sweet potatoes, and cranberry orange relish. We also finished with a batch of fudgy chocolate brownies for good measure. We were lucky to be joined for dinner by my brother (in town for the weekend) and our friends Eric and Kate. Kate missed out on one  of our first blog dinner parties and we were happy she could be a part of this one!

I’ve talked about my brother before; he has his own competition barbecue smoker and team and loves to cook all things meat. But a Turducken has never made its way into his smoker, oven, or grill. He was given the task of preparing the Turducken for our meal. The roast had been defrosting for 3-4 days and was ready to cook. It came pre-seasoned and ready to roast, but in my family we always like to doctor things up our own way. He added some oranges and onions to the roasting pan. 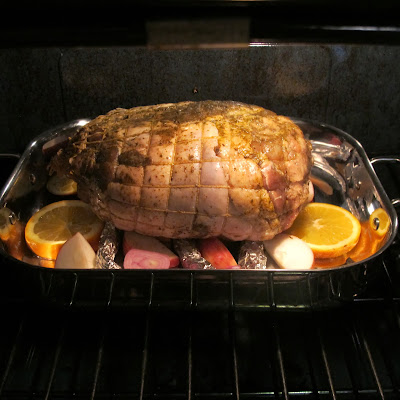 The Turducken went into the oven according to the website directions for an approximately 7 hour slow roast at 220 degrees.  Our chicken-apple sausage stuffed Turducken roast was around 6 pounds and needed those 7 hours to get to the right internal temperature. We wanted to be sure it was cooked through because we didn’t want to poison our guests (or me, the pregnant host!). My brother did the initial cooking on Friday and on Saturday we reheated the Turducken for dinner. To make sure it was cooked through we reheated for about an hour and then gave the slices a quick dip in a pan of hot chicken broth. 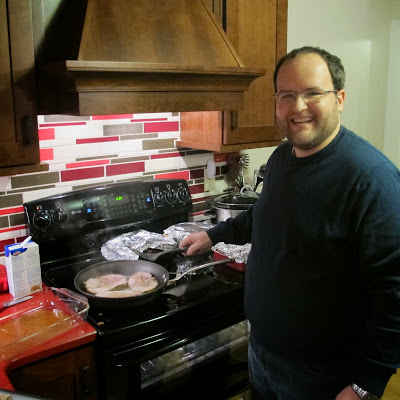 This ensured that it was hot and thoroughly heated through. One note for next time – cover the Turducken at the beginning of cooking time to get the temperature up more quickly.

Everyone had a generous slice – including the two year old. The roast could have served 8-10 as part of a large meal. There was a lot of meat! We didn’t know what to expect but all enjoyed the experience! The slices were mostly turkey, followed by stuffing, then duck, then the least amount of chicken. 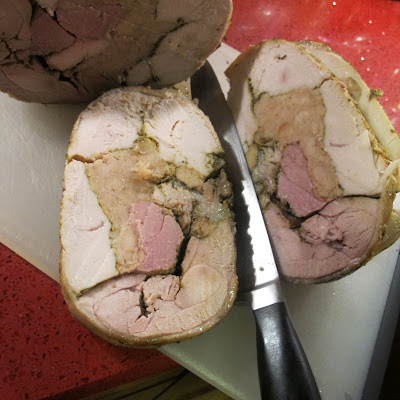 The meat was surprisingly moist even after all that cooking. The stuffing was more of a bread-mush with sausage flavor more than a distinguishable stuffing (very tasty though). The hubby thought the duck would be tough but that wasn’t the case. Next time I think we would probably wipe off some of the pre-seasoning and add our own spice rub. There was something in there that wasn't my favorite flavor. However it couldn’t have been easier to prepare as is – defrost, roast according to the detailed web instructions, slice, and eat! 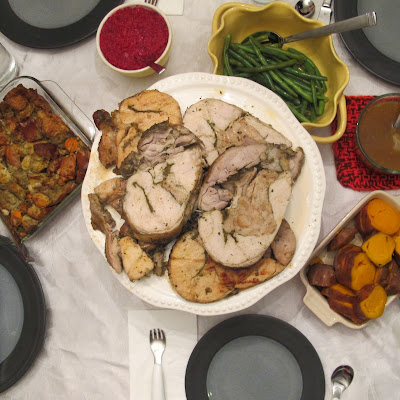 We had a blast trying out the Turducken and are glad that we had the chance to do so. Luckily if we get another craving we know that our local Stop & Shop has them in stock. Check the website for outlets in your area (US & Canada). 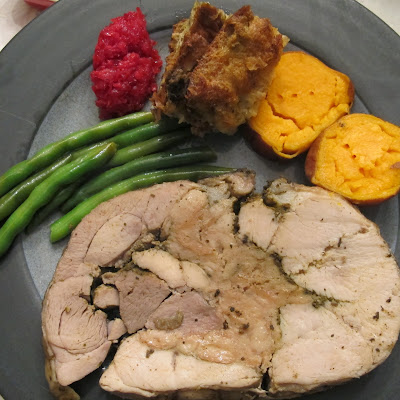 I will leave you with a Turducken haiku from the hubby:


Three birds all at once
It's a full house of poultry
Sliced like bread, yummy.


I received a complimentary Turducken from Echelon Foods. I was not required to review the product and did not receive any other compensation. All opinions are 100% honest.