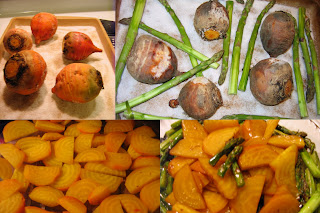 Passover also rules out one of our stand-by veggies, green beans. So the natural green choice is asparagus. Instead of just a boring steamed asparagus, I found a Mario Batali recipe online for roasted beets and asparagus. His recipe called for a frisee salad - I left that out (too fussy) To make it more colorful (and less messy), I bought some golden beets instead of the traditional red. This was an easy recipe and just requires some time in the oven.

Arrange asparagus and beets on a serving platter and enjoy! I served this dish at room temperature. It was delicious!