Cooking the Classics: Not Such a Simple Stew

This year the hubby and I took a vacation to celebrate two big milestones – our 30th birthdays and our 5th wedding anniversary. We decided to head across the Atlantic to Spain. Ever since my brother studied abroad in Spain in college, I have wanted to visit and experience it for myself. To get us ready for the trip, my brother cooked up a Spanish fiesta for an early birthday party.

Then, we got on the plane and headed east to our first stop, Madrid. This was the starting place for our fabulous trip to Spain! For 9 days we ate our way through Madrid, Toledo, and Seville. To make room for all the delicious comida we traversed the cities on foot, visiting museos, mercados, and more.

We didn’t just rely on our guidebooks or the internet in planning our food destinations. One of our friends, a native Madrileno, gave us a great list of restaurants to visit in Madrid. For Seville, I contacted (via twitter) a tapas restaurant that I had visited on a trip to San Diego last year. I had a really nice chat with the bartender while I was there, and knew that a place called Café Seville would point me in the right direction when we visited their namesake city. The suggestions did not disappoint! We found ourselves in places frequented by locals and dined on a variety of delicious foods.

Here are some of the culinary highlights of our trip: 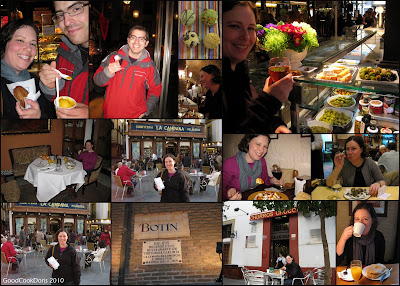 Spain was an interesting destination for us to visit. We love to eat a lot of different foods, but we are not lovers of jamon, langostinos, morcillo, pulpo and other popular Spanish foods. As Jews, we have a different perspective on Spanish history. In religious school we learned about the Spanish Inquisition (and History of the World, Part 1 thanks to Mel Brooks). While the Jewish population in Spain is starting to increase, it seems like so much Jewish heritage was lost over centuries since 1492.

We learned a lot about Spanish history while researching our trip, and throughout our visit. The Iberian Peninsula was home to many cultures: the Visigoths, Moors, the Roman Empire, Arabs, Jews and Christians. Jews had a presence on the peninsula since the arrival of the Roman Empire. However after centuries of tolerating different religious groups, when Ferdinand and Isabella came into power they decided that it was their way or no way. It was fascinating to tour Jewish history sites and see how they addressed the Inquisition. There were no detailed descriptions, you got the sense that “ the Jews were asked to leave”. We toured many religious buildings had been converted to churches after the expulsion of the Jews. The buildings have now been restored to museums that describe the history of the Jewish people in Spain before 1492. Jews had lived on the Iberian Peninsula for a long time, and their influence did not disappear when they left the peninsula. Many Jews who left went Morocco, Turkey, and other parts of Northwestern Africa. Some did stay in Spain, becoming conversos. To make sure that no one could accuse them of false conversion, many of the traditional Jewish dishes were modified.

The cocido, or stew, is one example of this. Our madrileno friend told us it was unthinkable for us to visit Madrid and not try the cocido. In Madrid, the cocido is a slow cooked stew served in two or three parts. First, the slow cooked broth with fideo (vermicelli noodles). Next meat, with garbanzos, potatoes, and what I later discovered to be lard! Third, the server topped the dish off with garlicky cabbage. This, and most, versions of cocido include a combination of beef, pork, and blood sausage. 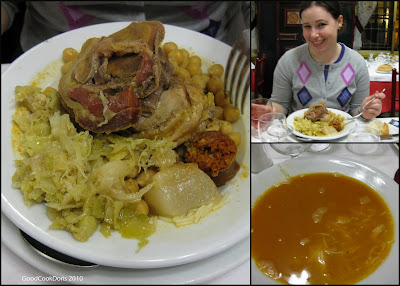 In researching the dish for this challenge, I discovered that the cocido had its roots with the Sephardic Jews of Spain. It was originally called adafina and was a traditional Sabbath stew. Jewish families would put the stew on a low flame on Friday, and then would be able to enjoy a hot meal on the Sabbath. In some of the material I read, often families would place their pots in a communal oven as not everyone had proper cooking facilities in their homes. When the Jews left Spain, they continued to make this dish in Morocco and their new lands. The name changed to dafina (meaning covered) or hamin. Others may know another variation of the dish as cholent.

For the conversos who stayed in Spain, it was important to demonstrate that they had given up their Jewish faith and adopted Christianity, even though many still practiced Judaism secretly. Modifying their traditional Sabbath stew was an outward symbol of this conversion. The stew came to include pork belly, bacon, sausage, and other non-kosher ingredients.

I was excited to find a recipe for a traditional Adafina on the official website for Toledo (Spain) Sefardi (Sephardic Jews). The site includes a section on the Gastronomia Sefardi and includes recipes for many traditional dishes. When we were in Toledo, we visited the temple, which has been converted back from a church to the Museo Sefardi. Thankfully, much of the building’s interior had been preserved and many artifacts had been returned to be displayed in the museum 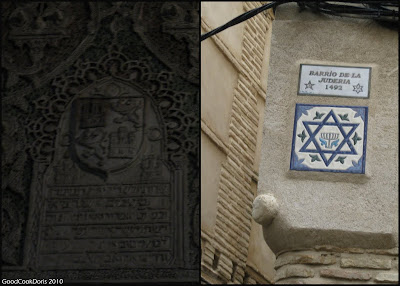 The recipe and website are in Spanish, so I pulled out my trusty high school English to Spanish dictionary to look up any words I couldn’t remember. I’ll post my translation and adaptation of the recipe below. The original can be found at http://www.toledosefarad.org/GASTRONOMIA/recetas.php. I consulted a number of websites in researching cocido, adafina, and the history of Jews in Spain. I’ll include a link to these sites at the end of the post. 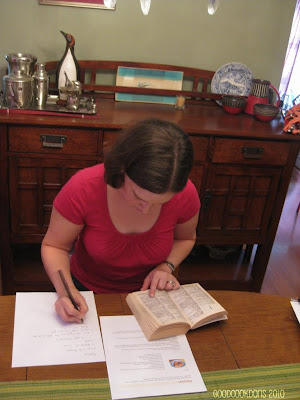 I love to use local, seasonal ingredients as much as possible in my cooking. This dish is no exception. My local ingredients include potatoes and onion from my local farmers market and meat from my local butcher shop. I talked to my butcher about the stew and he custom cut both lamb and beef shank for me. The rest of the ingredients are from the pantry.

This is a multi-day recipe. The first night is soaking the garbanzos and the second day is preparing the stew to simmer overnight. This was designed as a one-pot dish that can provide many meals throughout the Sabbath day. It includes vegetables, meat, and hard-cooked eggs which can be eaten at any time.

I started by layering the ingredients in my large Le Crueset red French oven. While the ingredients were coming to a boil, I prepared ‘el relleno’, almost like a meatloaf. I rolled it up in cheese cloth and tied it so there would be individual servings. Then, after 6-8 hours of cooking, I pulled it out of the oven for dinner. The eggs had hard cooked in their shells, taking on a tan hue from the onion skin and meat. The meats were fall apart tender and the shanks had imparted a deep, rich flavor to the broth. 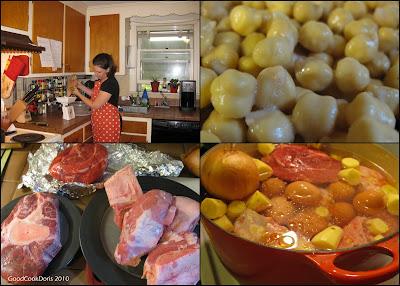 As we enjoyed our adafina, we could imagine the Juderia Sefardi enjoying this dish centuries ago. Food is a wonderful way to connect with your heritage. A simple dish, such as a stew, can show the influence of one group on the cuisine of an entire nation. 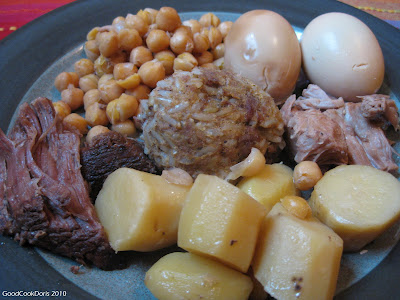 The day before, put the garbanzos in water to soak
In a stainless/non-reactive pot, add ingredients in this order (leaving a space in the middle): olive oil, drained garbanzos, meat tied with twine, veal shanks and beef bone, eggs in the center, and peeled potatoes whole and chopped
Do not mix
Season with salt and pepper and cover with cold water
Bring to a boil and then reduce to a simmer, skimming the top
Cook until the foam has ‘retired’ or lessened
Add in the relleno
Cover with a lid and place in a 225 degree oven for 6-8 hours (or 170 degree oven overnight)

Mince the beef, or chop in the food processor until minced finely
Mix together the beef, rice, eggs and nutmeg (using your hands)
This should be wrapped in a fine cloth (cheesecloth), tied with twine, and shaped like a sausage 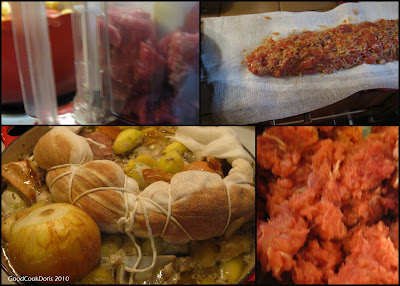 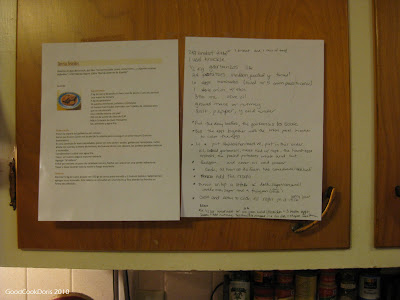 Thank you for your support in helping me advance to round two of Project Food Buzz! Project Food Blog is a contest hosted through Foodbuzz. Contestants participate in a series of challenges and a certain number advance through to the next rounds. You can see my official profile and entry by clicking here. Please take a minute to 'like', tweet, and vote! One readers' choice winner automatically advances.

Labels: next food blog star
Email ThisBlogThis!Share to TwitterShare to FacebookShare to Pinterest
Posted by Lara @ GoodCookDoris at 5:34 PM