Dave and Linda from Monkeyshines in the Kitchen chose Soufflés as our November 2010 Daring Cooks’ Challenge! Dave and Linda provided two of their own delicious recipes plus a sinfully decadent chocolate soufflé recipe adapted from Gordon Ramsay’s recipe found at the BBC Good Food website.

The soufflé is an item that is found in the ovens of experienced pastry chefs. It inspires awe from diners and fear from the novice home baker. This was my first attempt at a soufflé. Baking in the Good Cook Doris kitchen is usually biscuits, breads, and the occasional batch of cookies. I was excited to try something new and searched for a recipe that caught my fancy. I settled on a coffee soufflé, mainly because I wanted to make individual servings in my coffee mugs. Now doesn’t that sound fancy?

Using a recipe I found at Cook Almost Anything I set out to create a beautiful, flavorful soufflé. I read through the Daring Cooks challenge tips, and made sure to prepare all my ingredients carefully. I should point out that the recipe is in grams. Without a high tech scale, that meant some mathematics conversions and a few best guess estimates on amounts. 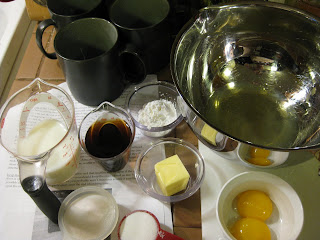 With everything out and ready, I got to work. First up was making the custard. I had set aside some coffee from my morning pot and added that to the milk and sugar to create the liquid. After melting the butter and whisking in cornstarch to thicken, I added in the coffee flavored milk and set it aside to cook and thicken. I successfully added in the egg yolks without scrambling them. Success #1! 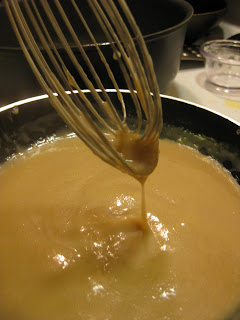 The last time I tried to whip egg whites I ended up with bowl of bubbly liquid egg whites. I made sure to follow all the tips this time – clean bowl, room temperature egg whites, and high speed mixing. After just a few minutes I had soft peaks! Success #2! 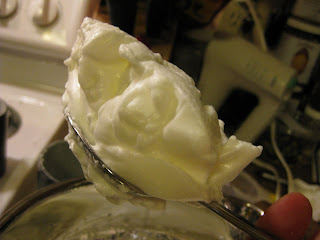 At this point, the recipe called for mixing in ¼ of the egg whites to ‘slacken’ the custard mixture. I probably could have looked that up, but figured I would gently mix them in and it would be okay.

The next step was to gently fold in the remaining egg whites into the slackened custard. I folded as best as I could and until I was satisfied with my effort. Because my coffee cups were differently shaped than those in the recipe I used, I estimated the amount of soufflé batter to pour in. The recipe said ¾ full and that’s what I did. I filled 2 prepared mugs ¾ full and then spooned the remaining batter into the third mug. I figured it would still rise, it just wouldn’t rise above the rim. 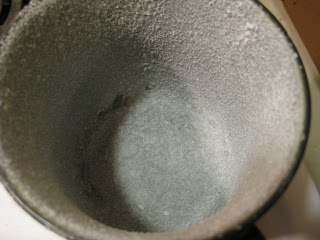 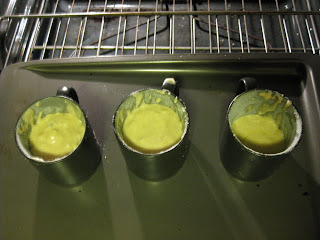 I carefully and delicately placed my soufflé mugs onto the heated baking sheet in the oven. I pulled a stepstool up to the oven and plopped myself down with my phone and camera to watch the soufflé magic happen. 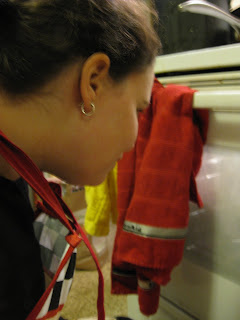 After 10 minutes there was no action. I reset the timer and pressed my face back against the oven door window. 10 more minutes pass…I think I see something starting to happen. The soufflés are rising. And rising. I start to feel great about my first soufflé attempt. I try to take a few pictures, but they don’t come out through the door. So I continue to watch and wait. I see bubbles…and steam…and then it happens. The soufflés really come to life and instead of rising into the sky, they start pouring down the sides. I don’t think this was part of the recipe?

As I sat watching my soufflés bubble over, I just started laughing. Over the last year I’ve developed a new attitude in the kitchen. I find myself taking on more challenging projects inspired by Daring Cooks, personal interest, and inspiration from fellow bloggers. This soufflé challenge illustrated my new philosophy perfectly. I could get really upset and beat myself up for screwing up or I could laugh and appreciate the hilarity and enjoyment in failing at trying something new. I chose #2. Instead of crying over exploded soufflés, I let them continue cooking until the drips down the sides of the mugs looked golden brown and set. I removed my creative interpretation of the soufflé from the oven and proceeded with my photo shoot. 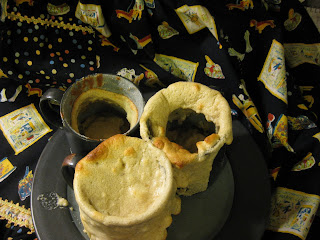 They may not have set and they may not have tasted exactly right, but I successfully whipped egg whites! And I didn’t scramble my yolks! And I had a blast trying something new. And that’s what it’s really about - being confident in your abilities and not being afraid to let your soufflés flop every once in a while. 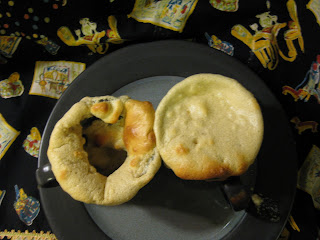