It was my second time going to a Boston Brunchers Brunch, so the deal I made with the wife was that to go, I had to write the post. As you can see, not only am I good at eating my wife's cooking, I am also good at procrastinating. Sometime last month, I joined my wife, Renee over at Eat.Live.Blog and about 17 others at The Cottage in Chestnut Hill for brunch. I was very interested in going because we previously had brunch at The Cottage's other locations. The one in La Jolla, CA and the one in Wellesley. I was anxious to go to the one in Chestnut Hill because we heard they had changed their menu to be more like their California offerings. We had such a fabulous meal in La Jolla, that we were disappointed that on our trip to Wellesley we couldn't find the same menu items. [editor's note: we went to the Wellesley location right when they opened and they did not have a full brunch menu]

The restaurant was well furnished and the abundance of beadboard made me feel like I was in a very well decorated and maintained cottage. So that made sense to me! Off the top, let me just say that everything was fantastic. I was immediately comfortable in my seat, the wait staff was very attentive, and the atmosphere was perfect for a Sunday brunch. The owner and chef came out and explained the menu and the talk around the table was that the mashed potato omelet was one of a kind. The promise of mashed potatoes made my ordering easy and when I told the waitress what I would like, her reaction was truly unique. I've never had a waitress show such genuine excitement over something I ordered. I knew I had made the right choice. 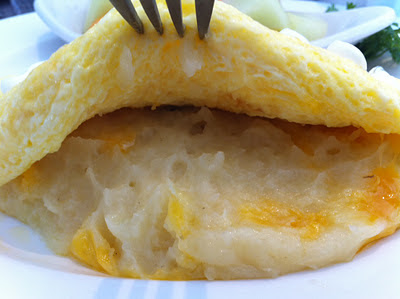 I forget what the wife ordered, but I think it was an omelet with a whole bunch of guacamole. It looked really good too. [editor's note: I ordered the Southern California Special omelet]


When the food arrived I was pleasantly surprised to find that on the side of my mashed potato omelet was a fruit cup. I thought this was great. I already had plenty of potatoes in the omelet so why would I want the typical hash brown side? 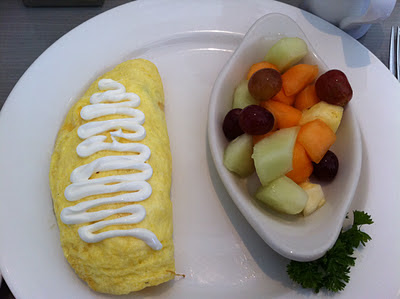 That they adjusted their offerings showed that they were putting a lot of thought into what they were sending out. Needless to say, the omelet was fantastic. I had to slow myself down so I didn't inhale it in seconds. What helped divert my attention was the complimentary scone that also came with my dish. It was fluffy, flavorful, and had little sugar crystals on top. 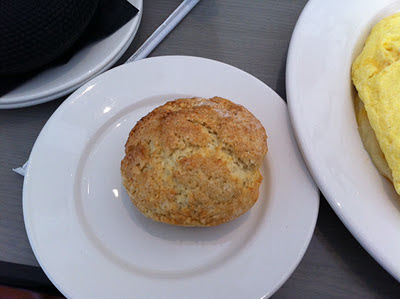 There was nothing to complain about, it really was a nice meal. To top it all off, a fellow bruncher ordered some French toast stuffed with strawberries and marscapone for the table and I was able to try a slice. I consider myself a bit of a French toast connoisseur, and I can say that this was right up there with the best I've had. 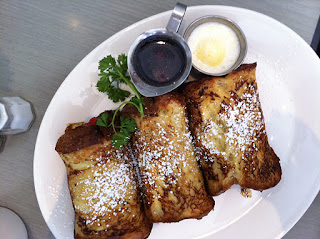 All in all, it was a great brunching experience. It made me feel, if only for an hour or two, that I was back near the Pacific Ocean, feeling the sea breeze come off the water as the sun warmed my skin. Not a bad feeling when in reality I was only looking out at Rt. 9 in Newton. The next time we are going out to brunch, we'll be sure to think of The Cottage so that we can, if only briefly, escape to some sun and fine California flavors.
[Editor's note: The Cottage provided us with complementary brunch, coffee, and juice. We paid for tip. Also, The Cottage opens at 9am for brunch - perfect for those of us who get hungry a lot earlier than 11 am!]

Labels: breakfast, eating out, review
Email ThisBlogThis!Share to TwitterShare to FacebookShare to Pinterest
Posted by Lara @ GoodCookDoris at 11:35 AM