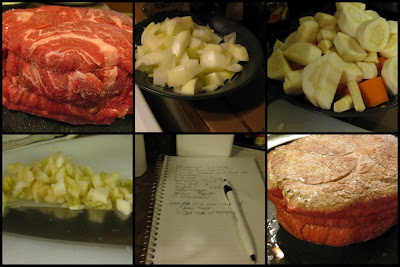 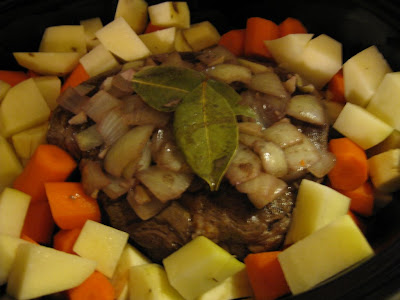 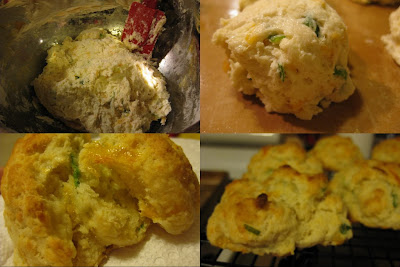 We celebrated Chanukah toward the end of the holiday this year, and even extended our celebration by an extra day. I didn't have time during the week to cook up any traditional holiday fare. With an impending snow storm this weekend there was plenty of time to cook up some Chanukah treats! I'll start with dessert and work backwards to dinner.

There are a few readers out there who are interested in reading about my experiment with making a modified Chanukah food. Instead of traditional fried sufganiyot (jelly donuts) - I found a recipe for sugar donut muffins that I turned into jelly donut muffins! I used a basic buttermilk muffin recipe from my well-worn copy of Joy of Cooking along with some techniques from a recipe on Baking Bites . The idea to inject jelly in the center was all mine. One of my pet peeves is that all the commercial jelly donuts are filled with raspberry jelly, my second least favorite fruit (peaches are #1). I wanted these to be just the way I like them! To get strawberry preserves into the middle, I used a pastry decorating bag with a long narrow tube on the end. 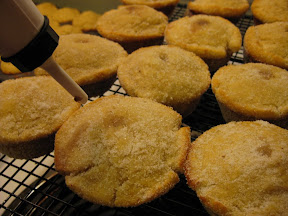 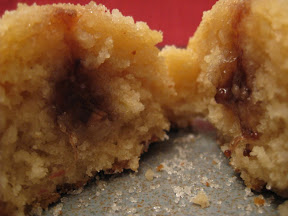 Tomorrow at work is our holiday potluck happy hour, so I doubled the recipe to make enough to share. I averted a small disaster, after mixing all the ingredients in the first batch and pouring in to the muffin tin, I saw the sugar still sitting on the counter. Oops! So all the batter came out of the pan, the sugar was mixed in, and then the muffin tins were filled again. I made a mix of mini-muffins and regular muffins. A warning, these are buttery, sugary, delicious and not at all healthy. But if you figure they are a once or twice a year indulgence, who cares! Enjoy!

The sequence is: 1) Bake the muffins, 2) Coat in butter and sugar, 3) Fill with fruit preserves, 4) Try to refrain from eating them all yourself.

Preheat the oven to 400 degrees
Set up a wire cooling rack for the muffins when they are done
Grease either standard 12-muffin tin or 24-mini-muffin tin
Mix the dry ingredients together in a large mixing bowl, set aside
Whisk together the wet ingredients in a bowl
Add the wet ingredients into the large mixing bowl (dry ingredients) and mix until just moistened (be careful not to over mix - the batter won't be smooth)
Using a greased tablespoon, scoop the batter evenly into the greased muffin tin
Bake until a toothpick stuck in the center of the muffins comes out clean, about 12-15 minutes

When the donuts are done baking, remove from the muffin tins and set on the wire rack
Brush the top of the muffins with the melted butter
Roll the muffins in the sugar and then place on the cooling rack
Repeat until all the muffins are coated in sugar

For the Jelly Filling
1/2 - 1 cup of strawberry preserves

Fill the pastry bag with the strawberry preserves and push it down to the tube
Stick the tube in the top of the muffin and squeeze for about 2 seconds, pulling the tube out as you squeeze
Be careful not to overfill the muffins (they will break apart)

Enjoy warm or at room temperature. And be sure to have a large glass of milk to wash them down! This will be on my holiday recipe list every year now. 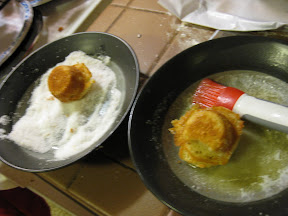 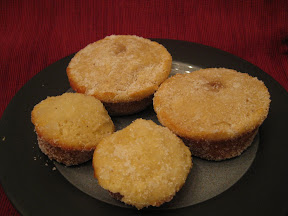 More Food on the Way

Since preparing my Thanksgiving feast, I've been busy finishing up my first semester of MBA studies. That said, I have been cooking and photographing, but haven't had time to get the posts up on the blog. Now that I've made it through, I'll have time to share the tasty meals that I've made over the last few weeks.

In the meantime, you can check out a full description of my 'not so classic' pumpkin pie at www.localinseason.com. The foodies behind Local in Season asked me to write up some kitchen adventures to share with their readers - and as a regular reader, how could I say no? Take a minute to check out the site and read all the great ideas for local and seasonal dishes!

Tonight I'm still celebrating the end of the semester and will let someone else do the cooking and bartending. Tomorrow I'll get back in the kitchen to fry up some end of Chanukah latkes and bake some sugar donut muffins (with jelly inside). Have a great weekend!
1 comments
Email ThisBlogThis!Share to TwitterShare to FacebookShare to Pinterest
Posted by Lara @ GoodCookDoris at 3:43 PM