Sometimes potato salad and coleslaw seem a little boring. To make our backyard BBQ a little more unique (and healthy), I substituted two tasty salads on the side. Both these salads are vegetarian and have vinaigrette dressing - so no need to worry about leaving them out for a few hours (no meat or mayo).

The first is a version of the sun dried tomato couscous salad that I've posted previously. You'll notice that this time I left out the salami to give the non-meat eaters another option. Other substitutions included basil (not parsley), baby arugula, and chopped kalamata olives. 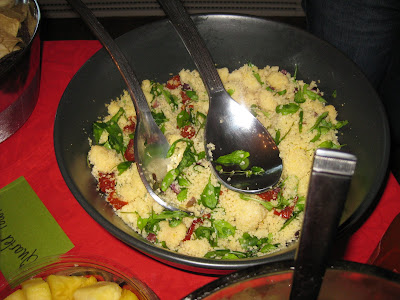 I found the recipe for the second salad in a Cook's Country magazine at the book store. This magazine is published by the same people from America's Test Kitchen, so you know the recipe has to be good! This recipe for Tangy Apple-Cabbage Slaw sounded so light and different that I went home to find it online. I had to register for a free trial of the website to get it, but it was well worth it! Here it is: 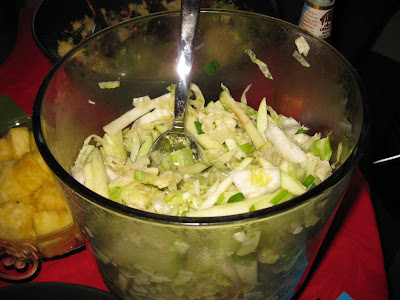 Start this first step about an hour before you want to make the salad:
Toss the chopped cabbage and salt in a colander set over a bowl. I put a plate on top to weight it down
Let it stand for about an hour, until wilted
Rinse the cabbage well under cold water
Drain, dry with paper towels, and transfer it to a large bowl

About 15 minutes before the cabbage ready to be drained, start to prepare the rest of the salad
Put the oil, vinegar, sugar, mustard and pepper flakes into a saucepan over medium heat
Bring to a boil, stir well, remove from the heat and set aside

Labels: good for company, side dish, veggie friendly
Email ThisBlogThis!Share to TwitterShare to FacebookShare to Pinterest
Posted by Lara @ GoodCookDoris at 8:16 PM