When He Fends for Himself - Breakfast for Dinner Two Ways

Welcome to another telling of the husband fending for himself. A couple of weeks ago I came home knowing I was on my own for dinner. I knew there was some left over steak and asparagus in the fridge from the night before. All I had to do was heat it up and eat it. It would be a very good dinner and I would be very satisfied, but there wouldn't have been much to write about.

So as I was opening the fridge and reaching for the steak, I saw something orange out of the corner of my eye. I thought for a second it could be cantaloupe, but I didn't think we had any. Instead, it was something more exciting, more delicious, and more noteworthy. It was lox, and there was enough for one more serving.

I immediately called the wife and made sure she didn't have plans for the fish. It was mid-week and I knew it wouldn't keep until the weekend for our Saturday morning breakfast. Also, I knew I could save the steak and asparagus for the next day's lunch. So I made an executive decision and decided to make my dinner around the night's secret ingredient: smoked salmon.
I took a sesame bagel out of the the freezer, thawed in the microwave for 10 seconds, and then threw it in the oven at 350 degrees for 10 minutes. Once the bagel was warm and crisp, I took it out of the oven and applied the cream cheese as soon as possible so that it could melt a little.
Then I put on the lox to complete dish.

It being dinner time, however, I knew a simple bagel with lox would not satisfy me. So, to stay with the breakfast for dinner theme, I filled a bowl with Barbara's shredded spoonfuls cereal, put in a splash of milk, and had breakfast two ways! 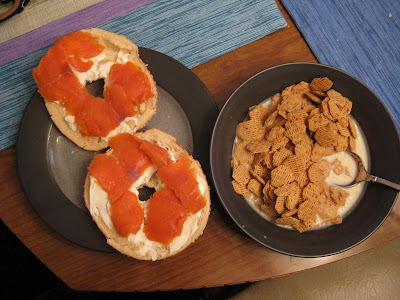 It turned into a great meal that I was very proud of. For me, lox is always a treat, but to have it mid-week, completely out of the blue, was something special. It would have made it more special if the wife was around too, but that wasn't the case. Instead, I made due with what I had to work with and produced a satisfying dinner!
Labels: breakfast for dinner, when he fends for himself
Email ThisBlogThis!Share to TwitterShare to FacebookShare to Pinterest
Posted by Lara @ GoodCookDoris at 8:36 PM