A friend of ours has taken up photography. I casually mentioned to him at our summer BBQ that if he ever wanted to take some food photos, I'd be happy to volunteer. Lucky for Good Cook Doris, he had a photo challenge that called for food pictures! Thanks for the new profile pic! Stay tuned for the next "When He Fends for Himself" - a new profile photo too!

I started thinking of colorful and photogenic recipes that would hopefully help him win his challenge. On the menu: grilled chicken with quick beer-brine, vegetable confetti couscous, and a red and golden beet salad. To finish off the meal on a sweet note - a quick 10 minute apple cinnamon pull apart bread.

We had our dinner shoot on a weeknight, so I did some cooking the night before in order to be ready on time. I roasted the beets and chopped all the veggies the night before. That left the chicken and couscous for the night of the shoot. I'll post photos and recipes below - it might be a long post. For more photos from my friend, visit his Flickr page at http://www.flickr.com/photos/14857669@N05/. 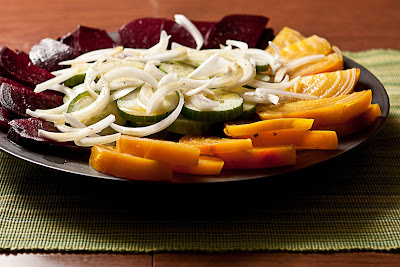 This is a recipe I found on my new Epicurious iPhone app. I thought beets would make for a good photo and set out to find a recipe on my train ride home. As noted in the reviews of this recipe, the dressing was delicious and worth making for salads and other veggie dishes. There was no photo with the recipe, so I took the suggestions and styled it my way!

This part can be done the night before or earlier in the day:
Preheat oven to 400°F
Wrap each beet in foil, enclosing completely
Place on rack in oven (be sure to wrap well so they don't drip)
Bake until beets are tender when pierced with fork, about 1 hour 30 minutes.
Cool in foil
Peel beets, then cut each into 6 or so round slices (I cut mine into half circles)
Note: use gloves when peeling the red beets otherwise your hands will be bright red (and peel over the foil!)
Store in a ziplock bag (red beets will stain your Tupperware)

Whisk honey, vinegar, and mustard in small bowl to blend
Gradually whisk in the corn oil
Season with salt and pepper
Drizzle over vegetables right before serving 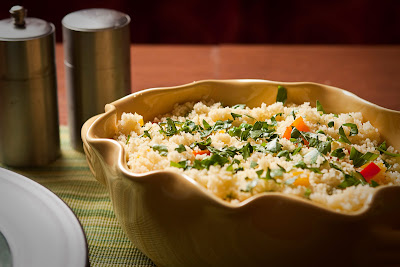 Confetti Couscous
This is a quick and easy dish perfect for using up leftover veggies. It's ready in less than 10 minutes and can be customized in many ways. The dish is great hot or cold, so no need to worry about serving right away. 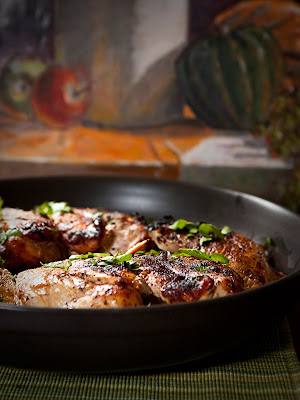 Beer Brined Chicken
I searched the web for some recipes with grilled skin-on chicken breasts. I came upon a recipe on a site called Cooking for Engineers that was adapted from an Emeril recipe. Using the flavors as a guide, I adapted it myself for this delicious dish! I didn't marinate the night before, but I can imagine it would be even more delicious if I did. Here's my version:

Heat the grill to 450 degrees
While the grill is heating, melt butter and mix in chili powder and cayenne pepper
Take chicken out of marinade and brush with the butter mixture
Lay chicken skin side down on the grill (watch to make sure it doesn't catch on fire like mine)
Flip every 10 minutes or so until it is cooked through (165 degrees inside - with a meat thermometer)
Due to the fire at the beginning, the chicken cooked a little quicker than expected (about 20-25 minutes)
Served with a parsley garnish, no sauce was needed! 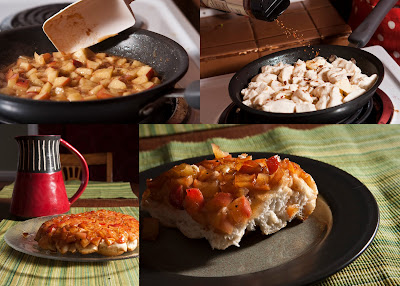 Quick and Easy Pull Apart Bread
I was briefly a Pampered Chef Consultant (I hate following rules!) and this is one of my favorite recipes that I took away from the experience. It works perfectly with my 8-inch skillet and cinnamon sprinkle. This dish costs maybe $2 at the most. Budget friendly and it could be diet friendly (if you use a healthier butter substitute).

Preheat the oven to 450 degrees (or the temp. on the can)
Melt the butter in an 8-inch oven-proof skillet over medium heat
Add 1 tablespoon of cinnamon sprinkle and diced apples
Saute until brown and just softened
Tear biscuits into small pieces and cover the apple cinnamon mixture
Sprinkle the remaining tablespoon of cinnamon mixture on top of the biscuits
Place the skillet in the oven for about 10 minutes, or until biscuits are golden brown
Remove from oven
Place a large plate over the skillet and flip over (like an upside down cake)
Enjoy - there won't be any leftovers! 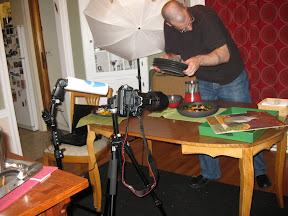 Labels: chicken, good for company, grilling, side dish
Email ThisBlogThis!Share to TwitterShare to FacebookShare to Pinterest
Posted by Lara @ GoodCookDoris at 8:43 PM