This month's Daring Kitchen challenge was a dish perfect for the chilly winter temperatures.  Our January 2011 Challenge comes from Jenni of The Gingered Whisk and Lisa from Parsley, Sage, Desserts and Line Drives. They have challenged the Daring Cooks to learn how to make a confit and use it within the traditional French dish of Cassoulet. They have chosen a traditional recipe from Anthony Bourdain and Michael Ruhlman.

I have heard about cassoulet, but have never made it at home. After checking out the recipe provided I know why! It is full of pork, duck, and sausage.  All three things that don't get cooked at our house.  Thankfully our Daring Cooks hostesses provided recipes and tips for the vegetarian and non-pork eaters.  However choosing a vegetarian version eliminates duck confit from the dish a technique that our hostesses wanted us to learn.  They also included recipes for leek and garlic confit to incorporate into the dish.

The vegetarian cassoulet recipe came from Gourmet Magazine, March 2008.  Glancing at the recipe it seemed pretty straightforward.  The meat version preparation can stretch over four days and I didn't want to feel left out.  I added extra steps to my vegetarian version to complete over three days of cooking. 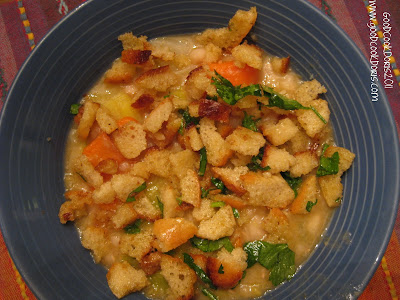 First, I baked baguettes to be turned into the garlic breadcrumb topping.  I made this King Arthur Flour baguette recipe for the June Daring Cooks Challenge (pate and freshly baked bread).  The recipe is easy to follow and the results are great! 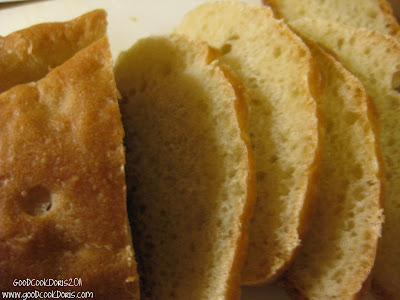 I also decided to buy dried beans in place of the canned beans the recipe called for.  The recipe lists 3 19-ounce cans of white beans.  In my head, I thought, "Okay, 3x19= 57 ounces".  I loaded up on dried navy beans in the bulk aisle and brought my beans home to soak.  About 3 hours into soaking, the beans were starting to expand out of their bowl.  I split them up into a few containers and let them to continue to soak.  About 12 hours in, I realized that I was soaking 3 times as many beans as I really needed.  Oops!  That's why last week's healthy snack ingredient was white beans. I parboiled the beans before using them in the cassoulet according to advice on the Rancho Gordo beans site. 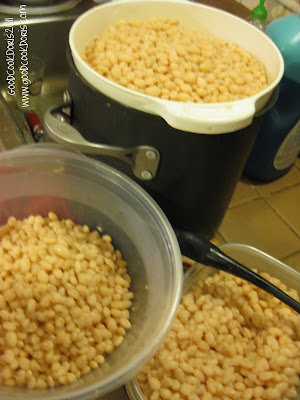 The other component I made in advance was the garlic confit. The hostesses provided a recipe from Saveur. The most difficult part was peeling the garlic. I could have done the whack and peel, but I felt like the cloves should be whole for this dish.  The picture didn't come out very good, but the garlic and remaining garlic oil were amazing.  The recipe made enough garlic to spread on toast and oil to use in my white bean dip. 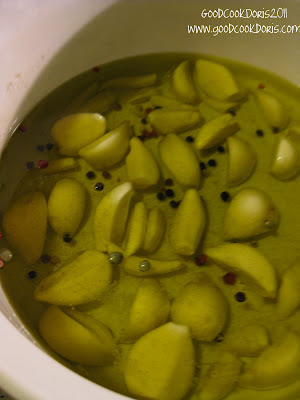 The last premade ingredient for the cassoulet was homemade turkey stock. I simmered leftover turkey bones with vegetables and herbs for a rich and flavorful stock.  The stock was a great swap for the water that was called for in the cassoulet recipe.

On cassoulet cooking day I assembled my prepared ingredients and chopped carrots and leeks. The first step was cooking down the vegetables and fresh parsley. 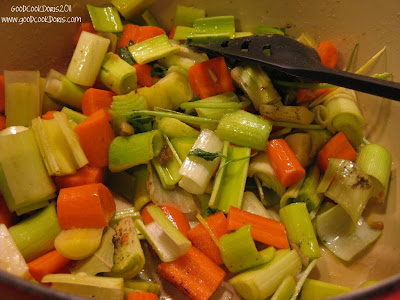 While the cassoulet cooked I toasted thin slices of the baguette for the breadcrumbs.  The slices dried out in a 200 degree oven for about a half an hour.  They were so crunchy that the food processor blades couldn't chop them.  I crumbled them by hand and added a few cloves and some oil from the garlic confit. They went back into the oven to toast for an additional 15 minutes before getting tossed with fresh parsley.  These were unbelievably good. I can't wait to make them again for salad, soups, or just a snack. 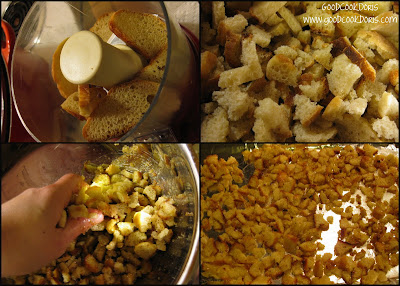 With everything cooked and prepared it was time to eat.  This cassoulet was amazing.  It was rich, hearty and tasted better each day.  We had enough for lunches and dinners for an entire week.  Thanks to the Daring Cooks for a fun and delicious challenge! 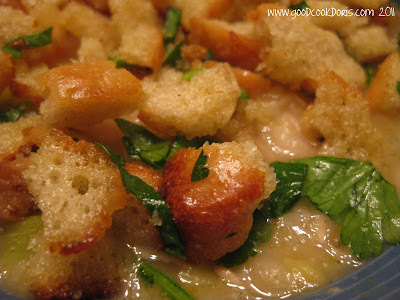 Did you enter to win prizes from Pretzel Crisps and Tribe Hummus yet? You have until Tuesday!
Labels: daring cooks, veggie friendly
Email ThisBlogThis!Share to TwitterShare to FacebookShare to Pinterest
Posted by Lara @ GoodCookDoris at 7:29 AM