When He Fends for Himself: Snack Dinner II

It's back to back weeks of "When He Fends for Himself". How exciting. This week I'm bringing back the dinner concept that swept that nation. That's right, it's Snack Dinner II!!! I feel it is my responsibility to present to you a makeshift dinner for when you are in a pinch. As a disclaimer I must mention that this snack dinner was planned.

I knew a couple of days in advance that I was going to be home alone and decided on a course of action. I wanted to center my meal around a recent stand-by, yogurt and granola. The challenge I faced was in filling in around it. I thought about popcorn, fruit, or ice cream for potential sides but didn't make up my mind until I went to the store. On the way to get the popcorn, I walked down the chip aisle and remembered one of my favorite snacks. It had to be a part of Snack Dinner II! So, instead of popcorn I went with Terra's SWEETS and BEETS. Because it rhymes, and because it tastes so good, I am unable to control the volume of my voice when saying "sweets and beets". Therefore, it always comes out as SWEETS and BEETS. Once I had the bag in hand, I went through the fruit section but was uninspired, gave up, and decided to head towards the register. On the way, I noticed a display of mini Ben and Jerry's containers and decided that would be the perfect dessert. I had my three course dinner decided on and headed home. 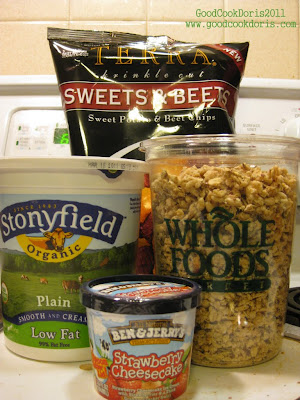 Once at home I decided to start with the SWEETS and BEETS, wait a little bit and then have the yogurt and granola, then wait a little bit longer and finish with the ice cream. Unfortunately, it didn't end up going as planned. I opened the SWEETS and BEETS and went to town on them. If the wifey was home and had tried to grab some for herself I would have probably taken a bite out of her hand. Before I knew it I had ate the whole bag! Six servings worth.....ugh. Because of this, I was actually kind of full. I took a comfortable seat on the couch (the couch always makes a cameo on "When He Fends for Himself") and ended up getting in a little bit of nap. 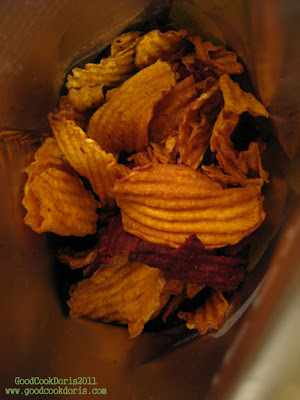 When I came too, I decided to continue on with Snack Dinner II because I had promised wifey a post worthy dinner. (Insert joke here). I dragged myself up and started to do my only prep of the evening - mixing the yogurt and granola. I like to put the granola in the bowl first so that the yogurt can be easily mixed in on top of it. Since wifey had just made granola the day before I wanted to use it for the second course. However, it wasn't where we normally keep the granola in our pantry. I looked in all the shelves, checked the counters, and even tried the refrigerator. I like to say that she was hiding the granola from me, but she'll say that it was my super hero personality "Captain Oblivious" making an appearance. It turns out, the granola was on the dining room table. Before we left for work in the morning she told me where it was, but by dinner time I had just forgotten. Whoops. 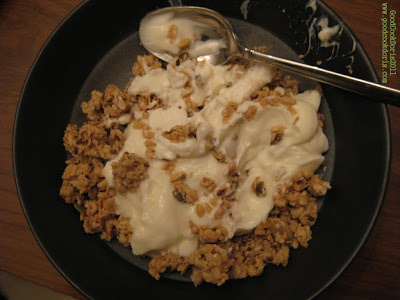 Anyway, I instead went with the pumpkin and flax seed granola I normally get from the bulk aisle at Whole Foods. It is pretty tasty and I usually mix it with plain Stonyfield yogurt. I was still a little full, but knew I had a job to do. Once the second course was finished I went back to the couch and decided there would not be a third course. There was no room for the tiny Ben and Jerry's anywhere in my stomach. Snack Dinner had defeated me. To top it off, when I went to pick up the wife at the train station my stomach began to hurt. I think maybe I had a little too much SWEETS and BEETS. Thankfully, it didn't last long and it didn't ruin my night.

All-in-all, I think it was a successful snack dinner. The purpose of snack dinner, in my mind, is to not go hungry while expending as little energy as possible. This I accomplished in spades. While this was a manufactured snack dinner, I want it to be a guide for when you're home alone, lazy, and afraid of wasting away. It is OK to eat a bag of potato chips for dinner every once in a while. If all you have is canned olives and a granola bar at home, by all means eat them! No one is there to stop you. Our market research shows us there's a high probability you are an "adult." Go for it! You'll be glad you did, I promise.
Labels: eating in front of the tv, what's in the pantry, when he fends for himself
Email ThisBlogThis!Share to TwitterShare to FacebookShare to Pinterest
Posted by Lara @ GoodCookDoris at 8:18 PM