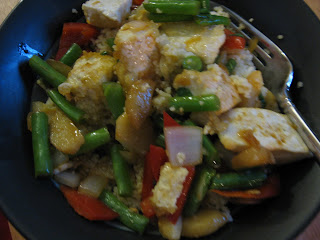 On some cooking show or in one of my cookbooks there was a tip to dust tofu with corn-starch before pan-frying it to get a nice golden brown crust. I tried it when I first found it and it was great - crunchy on the outside and still tender on the inside. Tonight I either had too much oil or the wrong temperature or I put the cornstarch on too early. My tofu kind of stuck to the pan and the nice crispy crunch came right off. Or maybe I should blame it on my resident dishwasher - the really non-stick pan was dirty so I used a different pan. Either way, it was still tofu and still tasty.

For the vegetable part of the stir-fry I stuck with a pretty basic mix. I served it over couscous (no rice in the pantry). We got a new cilantro plant and have a lot to use so I added that in at the end. Here's the veggie recipe. I'll skip the tofu recipe until I get it right!

Heat a large skillet over medium heat
Add a tablespoon or two of vegetable oil (enough to cover the pan)
Toss in veggies
Cook for 4-5 minutes and then stir
Cook for another 3-4 minutes until veggies are cooked through, but still have some crunch

Mix all sauce ingredients (except cilantro) and pour over veggies
Sprinkle cilantro over the skillet and stir
Serve and enjoy!
Labels: asian cuisine, veggie friendly
Email ThisBlogThis!Share to TwitterShare to FacebookShare to Pinterest
Posted by Lara @ GoodCookDoris at 9:45 PM