"When He Fends For Himself" 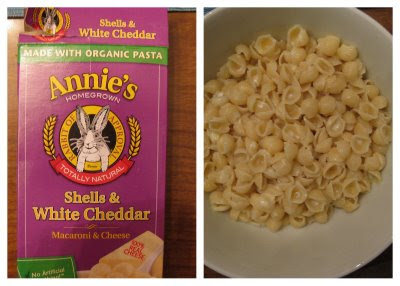 This post is the first edition of what will be a regular feature on this blog titled, "When He Fends For Himself". More often than not, at least one night a week the main cook has evening plans which puts me on my own for dinner. Because I knew I wanted to blog about how I managed without her, the meal I choose for this week is a classic, a staple, and my favorite go to meal.

Macaroni and Cheese. In recent years I've switched from Kraft to Annie's. It was a great move on my part. Annie's is all organic (so I think it's good for me) and instead of yellow goop, the cheese is a nice white cheddar. Also, instead of traditional macaroni, it is in shell form. It is very tasty and I highly recommend it.


For this meal, we had run out of the microwavable three-minute version, so I went the old-fashioned route and boiled some water. What I like to do when I boil water is turn on the burner to about half-way (this drives my wife nuts) so that the water can really ease its way into the boil. While I'm waiting for it to boil, I usually check my email, surf the net, watch TV, or just try to stay awake because the stove is on.


Once it's reached a boil, I pour in the shells, stir it once, and walk back to whatever it was I was doing as I was waiting for the water to boil. At some random time (8-12 minutes later, most likely), I return and strain the water. I then add a nice hunk of margarine. I like to add the margarine first so that it can begin the melting process. I then add some milk (half 'n' half makes it taste extra good) so that there is sufficient moisture available before mixing in the cheese.
Once the cheese is mixed in, I'll dump the whole contents of the pot into an extra large bowl (see picture) and dig in. About a minute later all the shells have been eaten and I am completely satisfied.

Really, the best part about eating macaroni and cheese alone is that I can eat the whole box. If the wife is around, she will say things like "Don't you know there is more than one serving in that box?" So, I'm guilt free until she gets home. Don't get me wrong, I've got to be the luckiest husband on earth because not only am I married to a beautiful, funny, and smart woman, but she also loves to cook. But there are nights when I'm on my own, and when I am, I'll let you know how I managed...
Labels: eating in front of the tv, pasta, quick meal, when he fends for himself
Email ThisBlogThis!Share to TwitterShare to FacebookShare to Pinterest
Posted by Lara @ GoodCookDoris at 8:18 PM